Perhaps just a short post here and there in between my epic musings will keep me off goddamn Facebook for five minutes.  I hate what I'm so utterly capable of becoming...middle aged woman who updates her profile three times a day about my tummy troubles, recipes and funny things my cats do.

The voyeurism and immediate gratification of FB are intoxicating to me and at the same time, I feel losery and icky for checking it so much. I actually logged out today, a new thing I'm trying.  If my "home feed" doesn't pop up without some effort on my part maybe I can lay off for awhile.  Sub-zero windchills, unemployment, all my CBS soaps being cancelled.....I'm in a serious risk group.

My iPod is the tiny kind which is hard to spot and never where I think it is. It's never lost but it's always lost.  Today, I found the earpieces and the iPod at the same time, a rarity, so took it on my dog walk supposedly to listen to music but inevitably to get my groove on.  I don't listen to my iPod indoors because when I sing along, people born of me seek me out from the furthest reaches of the house like heat seeking criticism missiles to complain that I'm somehow killing them. I can't really listen to my iPod on summer dog walks because everybody's out and about and a person is always being snuck up on by people from the rear or the side wanting to chat or say hi just as a person is hitting that high note that feels so right but sounds so wrong.   I key change constantly and well, the lyrics...now that's a problem, like my parents before me, in middle age.   I forget words, change them, sing them phonetically....no apologies, I'm expressing myself artistically.  As William Wallace and my daughter Olivia declare when feeling oppressed, "Freedom!" 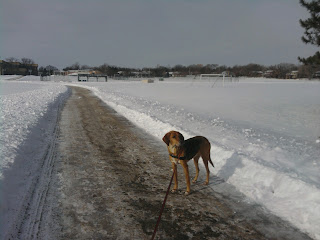 Minnie keeps watch for ambush of the friendly neighbor

Today, taking advantage of the arctic temperatures where nobody but nobody is out unless they have to be, Minnie and I take the very long way around the neighborhood and I sing at the tippy top of my lungs to an embarrassing selection of country, bluegrass and rock and roll.  Sing it Alan Jackson!  I like Good Times too!

Trying not to look too paranoid, I periodically check over my shoulder and spin a full 360 once or twice in case some idiot Wisconsin winter jogger creeps up on me whilst I'm flexing the golden pipes.  It's kinda private and I'm not willing to share my gift with strangers without vodka on board.   Minnie doesn't seem to mind the singing and probably enjoys my distraction from her digging up coprophagic bon bons in the snow.  In the world, Minnie and I are known as a pair to draw to.
Posted by Julie DeBrandt Hunter at 12:40 PM