The heat was on.

Blistering heat.  It's finally moving east but the past week has been like a long plane ride for me. Trapped and airless days and nights strung together, stuck either inside work or inside the house.  I felt and behaved like a caged wild beast. 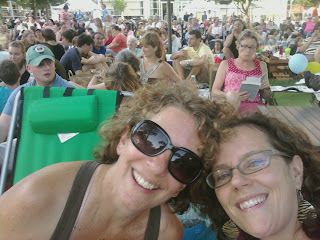 I pushed myself to go to the Concert on the Square this week despite the hysteria that it would be so hot people would die trying.  And what a good decision it was.  The Wisconsin Chamber Orchestra, incidentally conducted by our darling friend and neighbor Andrew Sewell, performs Wednesday evenings on the grounds of the Capitol (that's with an O, teachers) all summer.  It's free and a blanket and a bottle is the standard minimum-full on picnic dinners are common. It's a wine swillin' crowd generally.   What's stopping anybody from attending is a mystery to me.  This week, Andrew had recruited Revival, an ABBA tribute band, for the orchestra to accompany.  The band used the rotunda as their back stage and "took the stage" in a grand fashion on the Capitol steps to the sounds of a whoop whoop whoop of a chopper, as if they had somehow just landed downtown from Sweden just for us!  Hilariously cheesy but in the final analysis they brought some musical chops.  Showmanship if nothing else with gold capes and entreaties for getting the crowd on its feet, which they accomplished and was no small feat given the temperature.

Back in the day, when I was at the mercy of the disc jockey on WFIL FM radio, I was not a fan of ABBA, despite enduring the song Fernando incessantly.  The soaring melodies and the Swinglish lyrics made no sense to me as a kid, but then again, I hadn't yet traveled beyond Ohio and I loved the band, Kiss.  I'm not here to judge.

My friend Martha, with whom I braved the temperatures only to be rewarded with a cup of homemade gazpacho for my trouble, is a cellist and a lifelong musician/biology nerd by her description.  When I told her I didn't go for ABBA as a kid because I was pretty hard core rock, she replied, "For me, ABBA was hard core."  That was funny and of course, a little sad.  But the thing is,  I did eventually grow up and  began to see the merits of pop in my life.  And I'm not giving Mamma Mia any credit for this because I think that show, despite it's popularity with women, is lame-O!

The ABBA allure has got to be about its retro-ness and also generational shareability.  As a middle-ager, you hear an ABBA song and for good or bad, you remember a moment or an event or even a vibe from the past.  I don't even think you have to like the music to experience the nostalgia.  And the crazy thing is, at the height of their stardom in the seventies, the band was probably the least popular in the United States than anywhere in the world.  I guess that's the thing about retro is that it's more popular in its resurrection than it ever was in its hey day.

Martha and I watched over the course of the evening as pockets of people began standing up to dance or sway, young and old folks, moms and daughters, girlfriends, little kids, and even a few guys.  We were swept up in the good feeling of the crowd and the music made the heat almost a non-issue.  My kid and her friends knew all the words to the songs and they were eventually up dancing, although not until moving to a secure location away from me and Martha and our attempts to mimic all of the choreography of the background singers.  Arm movements are easy to do from a beach chair but it does sometimes cause you to spill your wine, so it's important to take care.

Posted by Julie DeBrandt Hunter at 7:59 AM