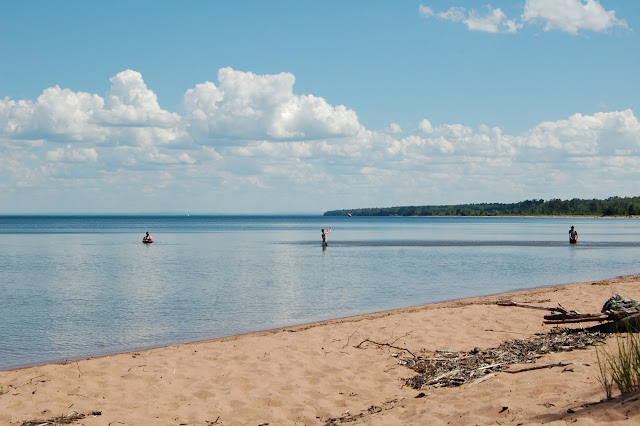 I'm a briny matron and I love the Atlantic Ocean but it's a two day drive involving the mind numbing Ohio Turnpike which if that doesn't kill you from sheer boredom, the deadly twisting terrain of the Pennsylvania Turnpike will.  The Great Lakes have become an important part of my summers when a trip east isn't in the offing.  With their shoreless horizons, cold, clear waters and lighthoused coastal towns and even islands to sail to, I've become a fan.

I've yet to brave interior lake culture yet for fear of man-eating muskies and blood sucking lake worms that hide in silty small bodies of water...in my mind.  Maybe next year.  And lake swimming is definitely a love the one you're with situation for me still because given equal distance I'd pick the ocean everytime.  Even the Greatest of lakes are, and there's no other way to put this, lakey. That fact is never more evident than on a hot, windless day when unidentifiable flotsam surfaces to the top of the water and the strangest of bugs descend on the beach to feast upon humans. 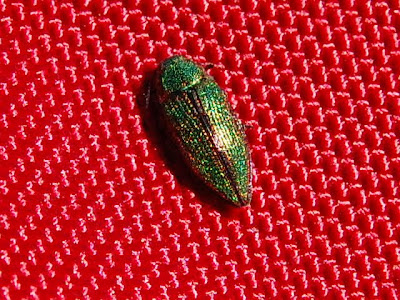 But most days the wind and the waves and the sand are there to keep my suspension of disbelief generally intact.  In fact, the first year we went to Grand Haven, MI, forgetting where I was, I ordered shrimp at dinner.  It was good... but it was not local. 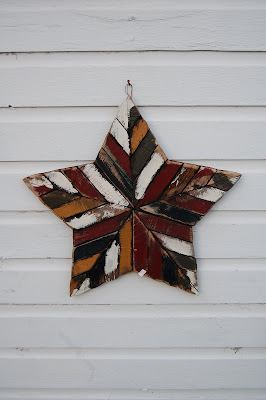 A few friends and I headed north to Lake Superior to kayak the sea caves along Wisconsin's Bayfield Peninsula near the Apostle Islands.   It's a sleepy region too far north to be a weekend destination for Madison or God forbid, Chicago, with a rich Ojibway history that once boasted a busy fur trade from the late 1600s through to the late 1800s before tourism came to the fore and the fur trade disappeared.  Good thing because I really don't look good in fur, however I do look good in gift shops.  The French were the first white settlers and who established the fur trade probably with a lot of Ojibway local knowledge of running water routes through Canada.  The Ojibway and the white settlers, French, English and then American fur traders plus both Catholic and Protestant missions, coexisted peacefully even marrying and having children together quite legitimately according to the museum.  After touring the American West a few years ago,  I found this information somewhat heartening, although I'm sure someone still found a way to subtly or otherwise cheat them out of land and money. 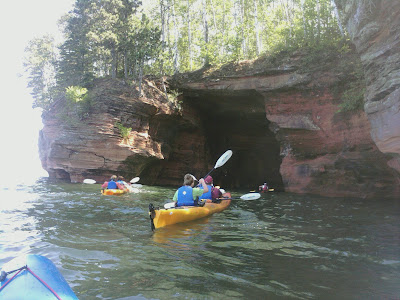 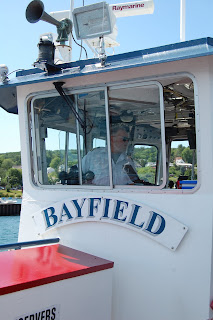 Lots of people go to the Lakeshore and Apostle Islands to camp and hike and enjoy nature's bounty.  I  go to kayak a few hours under closely supervised conditions, shop, get a little drunk at dinner and sleep in cottages with beds and screened windows.  Roughing it for me is going to Tom's Burned Down Cafe, an iconic tavern that burned to the ground maybe more than once and consequently was never rebuilt to more than an outdoor shanty with a tarp roof and ramshackle furnishings and amenities that make it look more like a giant party raft adrift in the lake rather than a business. 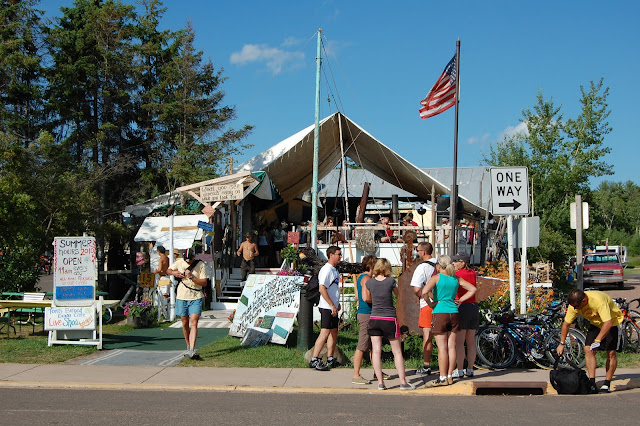 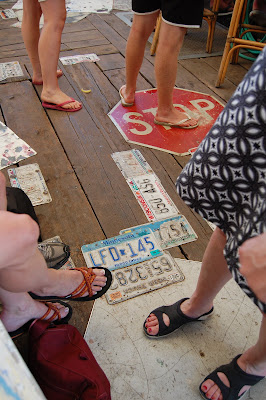 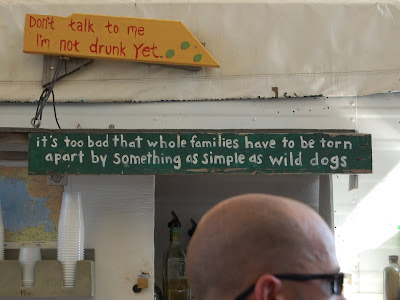 Handpainted signs with fortune cookie sayings hang everywhere, maybe not quite as haphazardly as they want you to believe but still giving the feeling that the Coral Reefer Band decorated the place.  It's a lower than low-key place where the bartenders are definitely a little drunk and the brimming money in the tip jars quivers everytime there's a gust of wind through the tarp.  The tip jars might be more full than the till.  It's a daytripper, lost weekend, party boat clientele and many a tipsy, shoeless bar hopper runs for each evening ferry back to Bayfield after spending maybe a lost day on the island.  Once you sit down at Tom's, you really never want to leave...and that's not just me.   It's partly inexplicable and partly not worth explaining because the description is lost in translation to the mainland.  The myspace page makes an admirable stab at it. 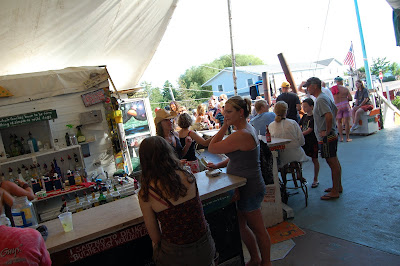 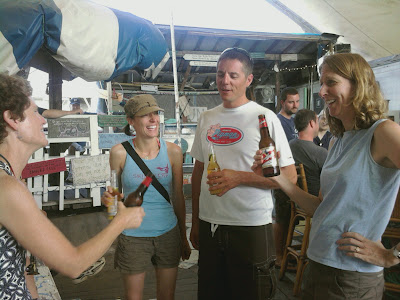 Ann and Joan grilled this couple about their relationship
Which brings me to musings part 2 but I'll save that for tomorrow.
Posted by Julie DeBrandt Hunter at 6:49 PM