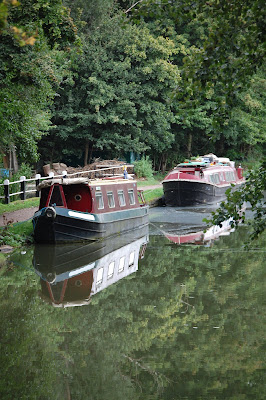 I didn't have my camera for this day and that's always the way, unless you're a photojournalist. I've been following the extraordinary events of my friend's blog, as she has witnessed two accidents and fire/rescue operations within four days. One rescue in the air and one on land. I add to that today, as I crossed the Thames, a water rescue by bystanders of a drowning person. A first for me in my 46 years.

Allison and I shopped all afternoon and she hopped the bus with her bus pass and all the bags as I made the short walk home on foot. I love crossing the river each day. It's always dynamic and radically changes day to day. The river right now is very swollen and the currents are challenging even for the resident swans and geese who maneuver constantly out of the currents just to stay close to the bridge. Hard work for the water birds this week. It was a pretty mild day today as winter goes, and I always check the river for pontoons and rowers as I cross. Generally, just to mutter to myself, "ya crazy sonsabitches..."

My friends, the tramps of Abingdon Road, are the only other daytime residents of the river banks this time of year where they can drink hassle free all day on the benches that line the path. They're a scrappy bunch of guys who mostly keep to themselves, drinking, pontificating in unintelligible garble and hugging. As per my usual routine, I cross the Folly Bridge and look downriver for my rowers and instead see a most extraordinary thing--a head bobbing in the middle of the river about two hundred yards away. Simultaneously, I see and hear two men who work on the pontoon boats below me running as I've never seen grown men run, the "man overboard" run I think, with orange life preservers up the dock stairs, across the bridge and down the tow path toward the drowning man. I then see with closer inspection there are many life preservers already in the water, floating far from the man whose head now appears to be bobbing under as much as over the water. He is smack dab in the middle of the Thames and swirling in the currents. Wait, now there are two heads. Someone's jumped in to save him.

Well, crap. I know CPR. I don't want to go, but this is England and it's possible I'm the only one who might initiate rescue breathing before putting on the kettle. When Olivia's foot was run over, they brought her a cup of tea. I better go down, I think to myself. I walk down the path and note now there is a THIRD man in the water swimming from the other side, quite athletically to the duo of rescuer and drowning man making their way slowly to shore. The rescuer reaches shore and he and another man drag the drowning man up onto the bank and begin pumping the man's belly very hard, probably breaking his ribs and injuring his spleen and liver, but I'm hoping also clearing the water from his airways. I'm still not at the scene but watching it all unfold. Someone from the opposite bank is yelling, "Breathe for him! Breathe for him!" Shut up, lady, I think. Easy for you to say, you're on the other side. I arrive. The athletic swimmer has made it across and is still standing in the water recovering from what was a fantastic but dangerous swim. Everyone's wet and I see that rescuer, rescuer's friend and drowning man are all very drunk. It's 40 degrees. I'm thinking hypothermia all around. They've turned drowning man on his side and he is definitely blue. I'm getting ready to announce my intentions of starting rescue breathing, as I'm simultaneously considering what blood tests I'll need (hepatitis and HIV surely, possibly malaria, leprosy...) once we've exchanged saliva and blood from my kiss of life....when I hear him groan.

PRAISE SWEET BABY JESUS! I do NOT have to put my mouth on his. I bend down, as the rescuers, including the pontoon boat guy, are starting to panic about what to do next. The drunk guy is screaming, "Stay with us, Woody. Don't leave us!" Can you believe it? Even tramps watch too much TV! I hear the sirens and they are close. I bend down and recap the situation for the rescuers, "Look, he's breathing. He's groaning and trying to talk so let's just keep him warm until help arrives." The rescuers call for jackets. I don't give mine. It's a little piece of nothing that would cover no part of this mountain of a man lying on the ground. This guy needs the electric warming blanket of an ICU but it's England and I'm sure they'll put on the kettle at the hospital. And so people offer up their jackets and although he's still blue, he's groaning and moving and that's fine with me.

The police have run the entire distance down the river path which is admirable and I note their fitness. I'm checking out the police? Focus, Julie.... We all start giving our stories briefly. Mine is that I don't think he was under water for very long, if at all but that I'm sure he's swallowed quite a bit during the rescue. I can't account for prior brain damage due to years of drinking at the river's edge, so it will be a challenging neurological assessment at the hospital. I don't think the water did him much harm today. His buddies bouncing on his abdomen is a different story and I hope he lives to tell about it.

I leave after admonishing the student who is not drunk and still standing sopping wet on the river bank, to get someplace warm before he becomes hypothermic. As I left, a mysterious smoking man in a Norwegian knit hat was telling the police, "He was pushed." Entrigue! Better get Inspector Lewis down here right away.

I got back out to the Abingdon Road just in time to flag down the ambulance for the police. I feel guilty for feeling relieved that I didn't have to suck face with the drunk drowning man.

As I said, Allison took the bus and I was supposedly right behind her on foot....twenty minutes later, I walk in. They thought I was still shopping.
Posted by Julie DeBrandt Hunter at 5:34 PM