The Saturday before Christmas

Shopping and a show in London. No better way for the Hunter family to celebrate than with a pre-Christmas gift to ourselves. Chip might have done without the shopping but being the big daddy of a houseful of women, he's always a good sport about going along and holding the bags. We love him for that, truly. 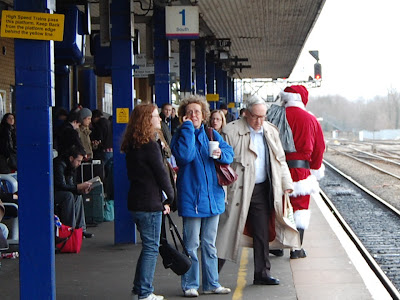 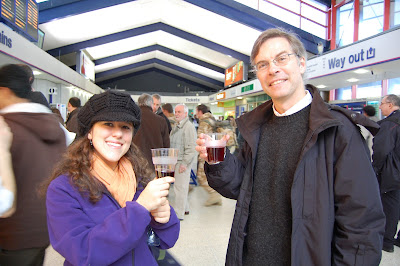 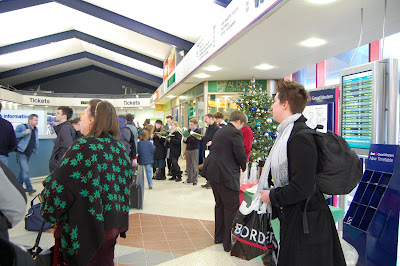 The Big Man in the Red Suit made his way around the Oxford train station, as the Helen and Douglas Charity Foundation handed out mince pies and mulled wine for travelers coming and going. It is awfully nice to come out from the shadows and publicly acknowledge this very big holiday that's kind of washed out in America with all sorts of inclusive winter imagery, very blatantly ignoring the giant elephant in the room with the fur trimmed, red hat. Who wants to celebrate wind and snow and ice without the promise of gifts? Christmas is a day our particular family celebrates mostly in our hearts with family traditions of cookie making and gift giving and merry making of all kinds. There's a little church mixed in because it's only right to acknowledge the little six pound, eight ounce baby Jesus, as Ricky Bobby would agree. In America, it's all about "winter celebration"....I get it, but I don't really care to celebrate winter--it's very cold and dark and a little depressing. So, Christmas tree, carolers, twinkling lights, Father Christmas and free wine in the train station were ok by us. 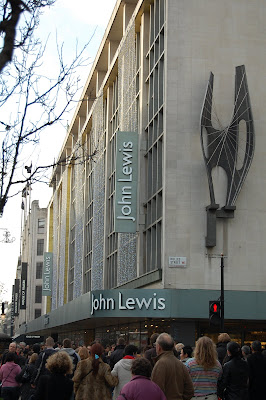 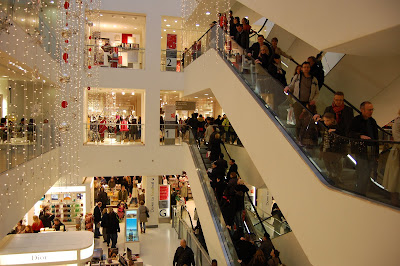 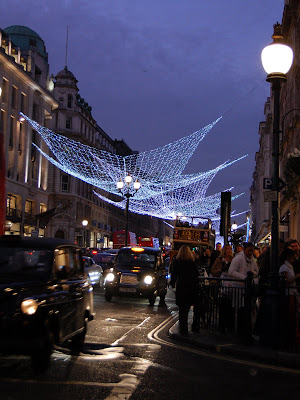 Our destination was John Lewis, one of the huge, traditional department stores in London. We had to go there because their television commercials have been so awesome--slaves to the advertising industry, we are. We bought some ornaments, a few gifts and some clothing before heading out on what was a very mild day, down Regent Street, passing Hamleys, the famous toy store ("the finest toys in the world" by their report) and being sucked in the doors by the crowd. Like earthbound starlings, we ebbed and flowed with whatever actions were initiated ahead of us. The flock sucked us past the teddies, the dollies and the various store employees set up like circus barkers, demonstrating the latest toys. As you can see, the little boys were enthralled with a clunking disaster of a toy that lit up, changed direction and made horrible noise like a demonically possessed moon rover. Thankfully, the crowd surged ahead and we were belched out onto the street in short order, our feet never having really touched the floor. 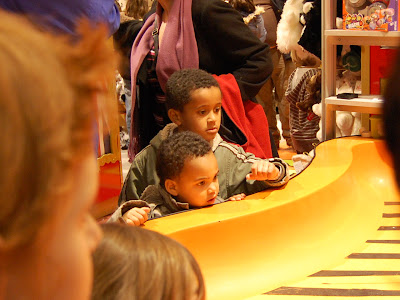 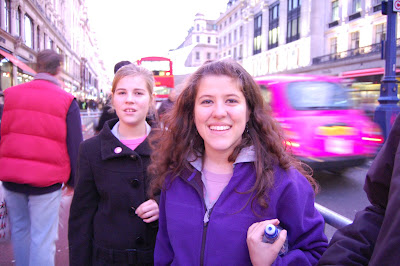 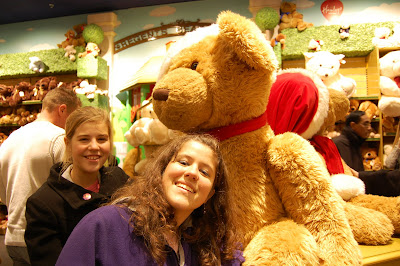 We proceeded down the street to the West End for a comedy show by Bill Bailey. I can't describe him except to say you should google him and you tube him. He was quintessentially British and laugh out loud funny. Eddie Izzard, probably the only guy funnier than Bill and doing his own show half a block away, sat five rows behind us laughing his head off just like the rest of the audience. His own show was scheduled just thirty minutes after our show ended. But hey, I guess it's a job and when you're not working, you go out and have fun like everyone else. 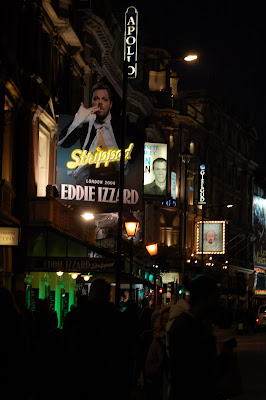 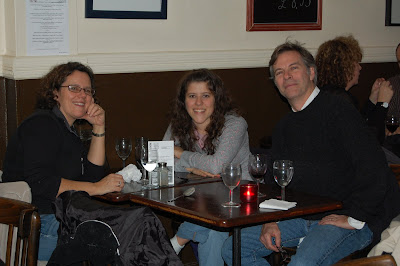 After the show, dinner at Cafe Emm in Soho. Lots of merry making in this very crowded restaurant; fun and loud and food average to pretty good. Olivia and Allison have dined out enough times to have a sixth sense about restaurants, steering Chip and I away from "experiences" in search of fun. Chip and I have dined out enough to almost ruin it for ourselves with the maximizing of the food experience. The girls have a special withering look reserved for restaurant picking, with flared nostrils and squinted eyes, unveiled when faced with a potential restaurant choice that has zero curb appeal...a loser restaurant if you will. They don't overthink it. If a restaurant is empty, has no ketchup on the tables (in their word, "fancy") or serves dishes with ingredients like lemongrass, it is likely sucky. TGI Fridays and Chilis, by this definition, are good restaurants so there is a balance to be struck. But the shared decision is important because they are right more than they are wrong. It's not all about the food when all you eat is chicken fingers and hamburger and you think everyone is watching you. Have we been misled all these years by the priorities of food critics? Are Chip and I losers? Don't answer, we already know.
Posted by Julie DeBrandt Hunter at 4:17 AM