Rarely in Madison is there a dilution in the sea of crowd Badger Red but I'm going to venture that one of those exceptions is the St. Patty's Day parade. I've been revealed as majorly Irish over the years after learning that more than a couple key Irish ancestors kept their Irish roots on the down low like many immigrants in the early 20th century.  "We sailed from England," was the party line of my maternal grandfather and his siblings.  Yeah, after sailing from Dublin to Liverpool first, they did not add.  And on my dad's side, the Irish Catholicness slid into WASPishness sometime mid-century with the second wave of kids in his family who attended Quaker schools and Presbyterian churches.
After our trip to Ireland last year, Olivia and I are renewed in our Irish pride especially for an excuse to celebrate.  And although this parade is more of a family event and I never did find a street beer, we felt one with our people. Chip and Allison prefer to keep their Irish roots to themselves I guess. 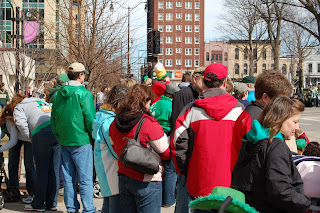 Here in 'Sconnie Nation, the Germans, Norwegians and Swedes block out the sun at all events from those of us born to smaller tribes.  Olivia and I stood tall among the crowd around the Capitol on this day.
A beautiful mild day as it often is for this parade and the UW Marching band kicked it off in happy form. 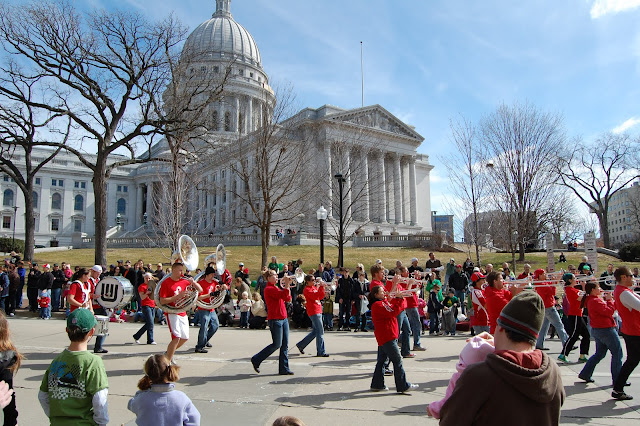 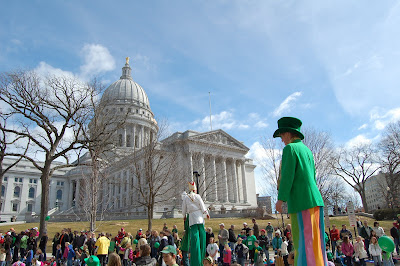 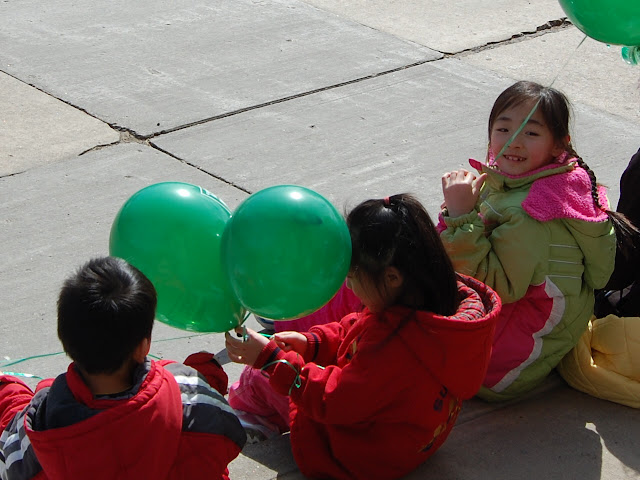 These kids were wild with anticipation of the parade, more so than the kids around them and I wondered if culturally this was an exciting event for them (mom, that's racist) or if it was just the buzz from the green cotton candy they were eating before the parade.
Olivia and I were fondly reminded of her brief stint as an Irish dancer.  I wasn't sure of her commitment long term at the time so I never bought the expensive dress and accompanying wig.  We were left, however, with two valuable lifeskills from our time as an Irish dance family.  Liv can still do a reel and I can roll this bad boy hairstyle from scratch, learned in a mandatory hair rolling class for Liv's one and only feis, pronounced "fesh".  Wigs are for slackers.
I hate to even joke because families who have an Irish dancer do little else.  It's a rigorous and demanding sport for a kid and an unGodly time commitment.  Wasn't for us, the dabblers. 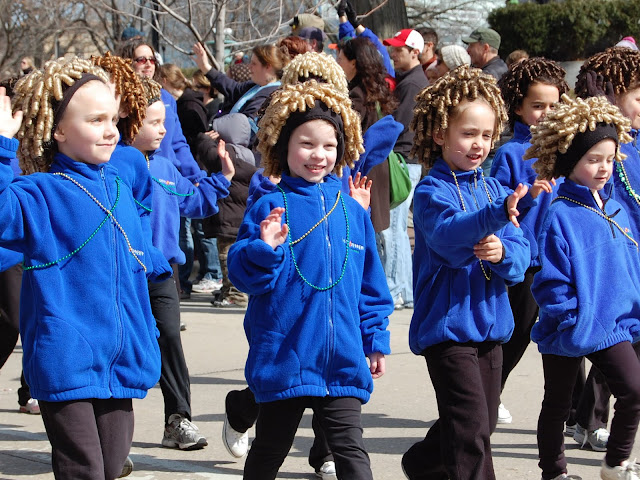 It's not a parade without Elvis and there were actually two.  And a Patsy Cline. 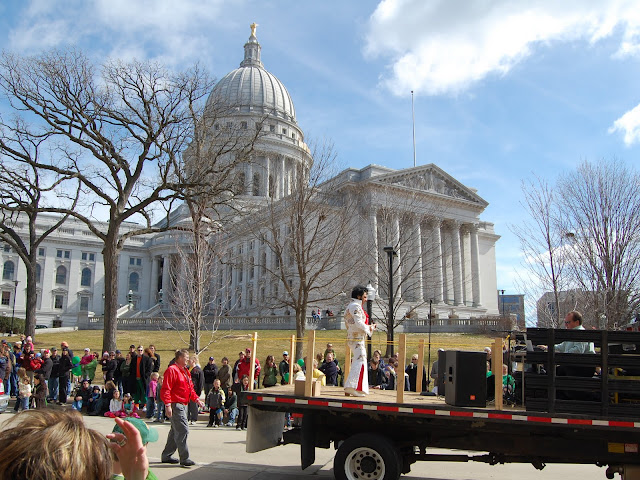 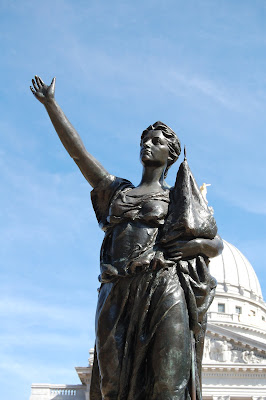 The delight on this kid's face was pretty representative of the feeling at the parade.  Mostly just families having fun and very few drunks which I know is different from New Orleans, New York and Philadelphia.  Still, I could have used one green beer. 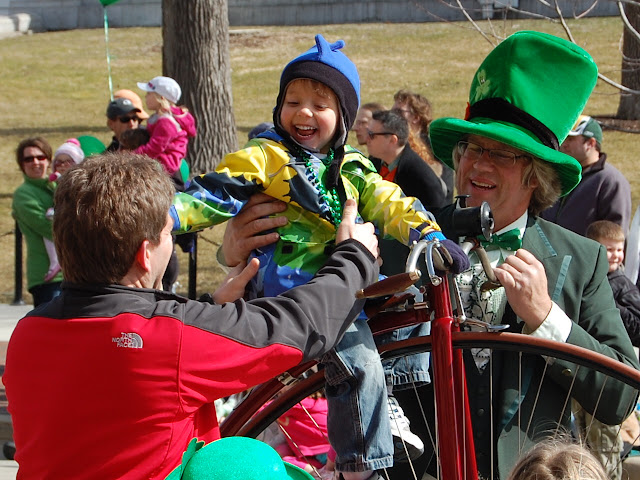 My Irish daughter proudly displayed her claddagh ring, positioned on the correct finger flipped in the correct direction to indicate she is on the market for a nice Irish guy. 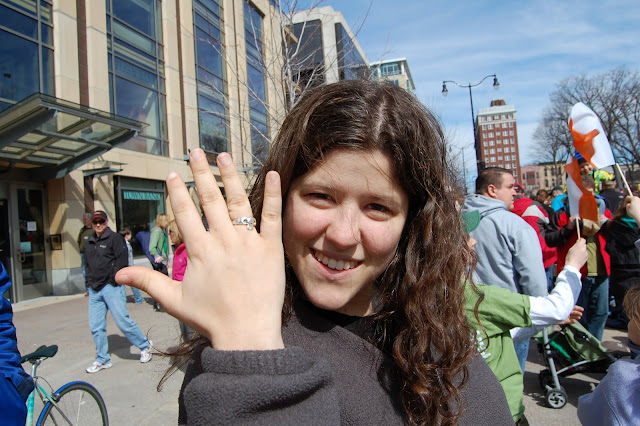 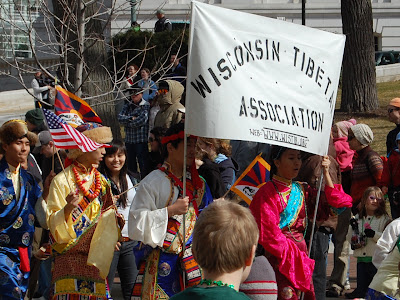 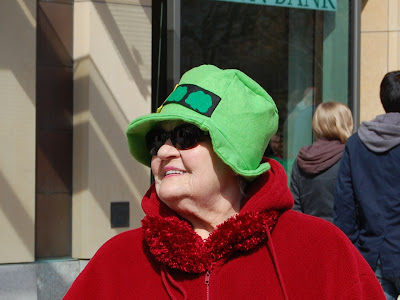 Stilts a very big thing in Madison parades.    Stiltwalkers, to me, an overly exuberant and cultish group. 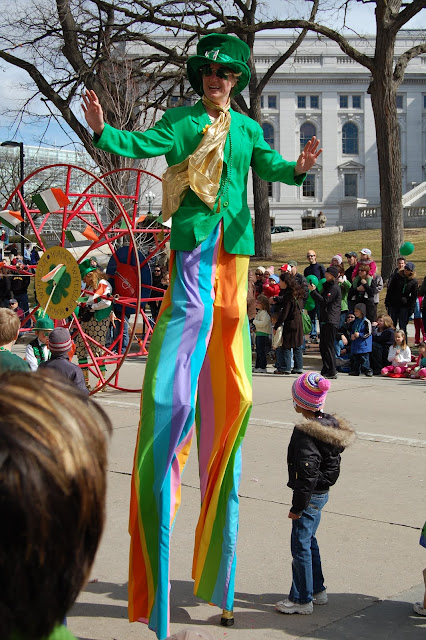 I think this guy is a real leprechaun.  Or is he like the guy in Philadelphia who looked so much like Benjamin Franklin that he could make a living all year long?  Can one be a leprechaun year round?  Is there a call for that? 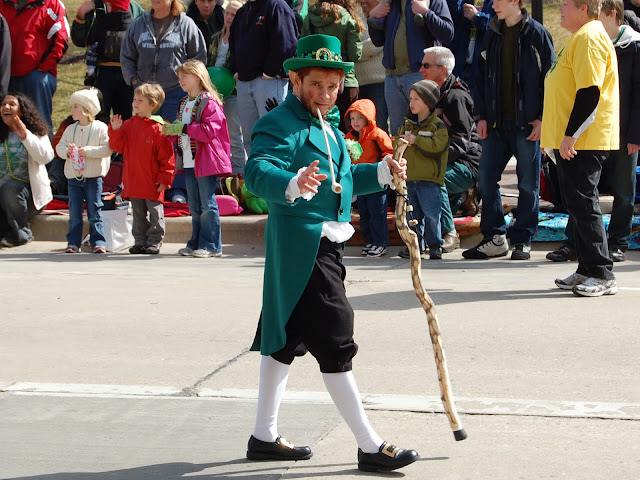 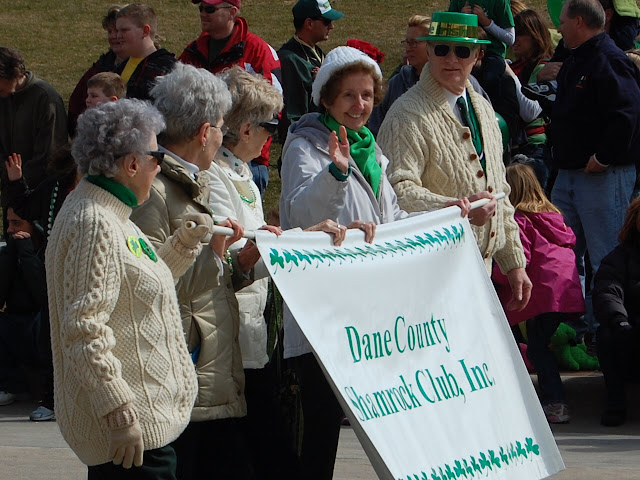 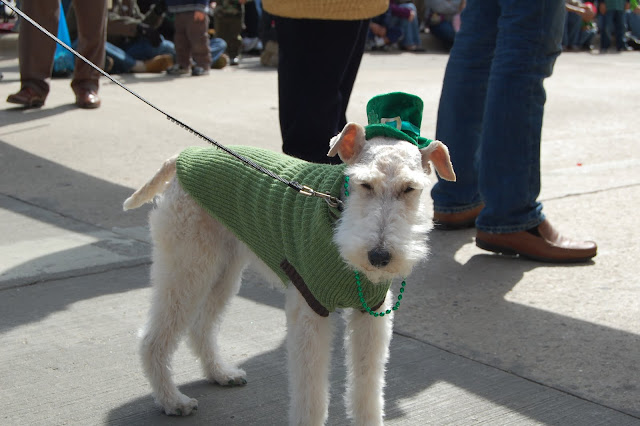 So a weekend initially full of dashed expectations with a long awaited ski trip cancelled due to five days of rain.  Chip's weekend full of softball so I was relegated to making my own fun with daughters one at a time as it turned out.  Saturday in Milwaukee with Allison shopping and dining, Sunday with Olivia at the St. Patty's Day parade.  I'm not a lemonade out of lemons kind of girl....preferring to just suck on the lemons and make everyone around me miserable.  But this weekend I do believe we made it work in the end.
Posted by Julie DeBrandt Hunter at 12:40 PM