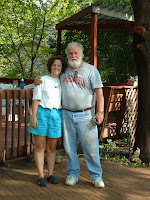 I just returned from an emotional trip to New Orleans to see my dad who is recovering from surgery. He's receiving chemotherapy and although tired, looks and acts just about the same. Maybe he's more weary than tired and that's certainly from living through Katrina and its aftermath, FEMA trailer included. Like my dad, the Greater New Orleans area and the Gulf coast also look weary but for the first time in two years, I can also see hope. There are finally some, dare I say it, signs of recovery among individuals which is unfortunately how our federal government left it to be handled in the end. The papers and news broadcasts show people finally in real progress of renovations post-Katrina....floors being installed, dry wall being put up, roofs for the most part without blue tarps...the intermediate touches on two year projects that are actually making the houses habitable. I saw a very encouraging thing in that Lowes has projected a future building site in East New Orleans. A very good sign that 1) people are coming back and need supplies and 2) it's safe and viable for retail to think about returning. Along the coastal highway in Pass Christian and Bay St. Louis, MS, where the beautiful beach mansions stood, people are rebuilding but up on stilts and maybe fifty or a hundred yards further back from the coastal highway, as if building so close again to the Gulf would tempt fate. Those houses and their contents were swept out into the Gulf in their entirety, leaving behind a concrete slab and in many cases strangely, the stone staircase that led to the house. It's almost a natural landscape in some ways, but different and raw in its lack of underbrush and pines. Only the live oaks withstood the storm and they sit few and far between along the coast struggling to recover from the salt water deluge. I tried to imagine what the missing beach houses might have looked like by trying to focus my eyes on their ghostly staircases. What was at the top of those stairs? A wraparound porch or a screened one...a brick or stucco house, columns, shutters on the windows, striped awnings, a front porch swing maybe, adirondack chairs on the lawn...My dad prefers to look out Gulf side while driving that highway. He's looking for things that make him feel good right now.
So, today I hope and pray especially hard for recovery for my beloved father and my beloved city.
Posted by Julie DeBrandt Hunter at 1:23 PM No comments: