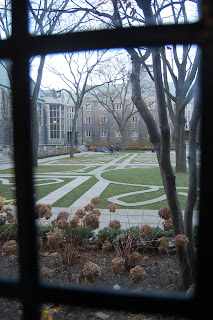 He calls himself the Dimmer.  Or did we name him that?  I can’t remember, it’s been so long.  The most tragically hip friend in our Rolodex has finally taken time out of his busy life amassing every pop culture tidbit in North America to take a beautiful bride, and she who would have him until death do you part, we salute you.
These friends all met at Oxford 25 years ago, the smarty pants lot of them.
I knew them as genius freaks of nature.   I was Chip's American girlfriend with a 6 month work visa who had marched across the Atlantic to keep an eye on her boyfriend and live her townie life to their gownie existence.   We shared drinks and laughs and parties at Christmas among other foggy memories.  Globally, the U.S. was engaged in battles with Libya, the American dollar was strong, Princess Di was having babies, Margaret Thatcher was Prime Minister, Feed the World was a hit song, strangely we played squash, we read The Herald Tribune and we ate the occasional full English at the St. Giles cafe to sop up a night on the town. 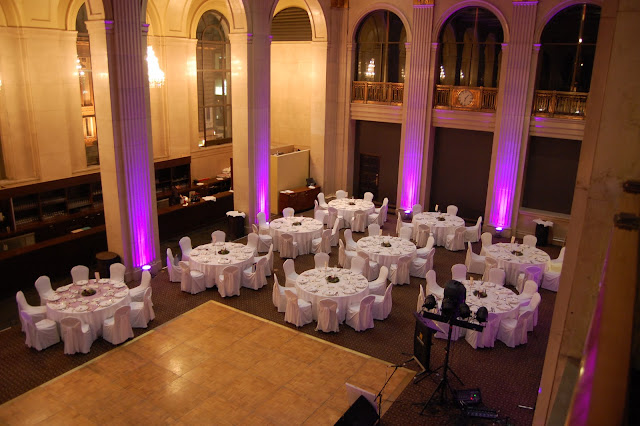 I can't claim anything special about my old friends versus other people's old friends save mine are dear to me and they are indeed mine.  What is it about these friends from my college years?  I can't shake them and I don't want to.   Old friends are in their own china cabinet of memories, to be taken out and admired and put back with care for later.  Old friends are  forever young in my mind's eye and they remind me of what I like about myself.  Our days were saturated with each other, and we moved through events and choices and shaped one another to be the people who we would ultimately become.   That imprinting makes it hard to lose one another even in periods of relationship laziness or long gaps between seeing each other. Face time is not required. 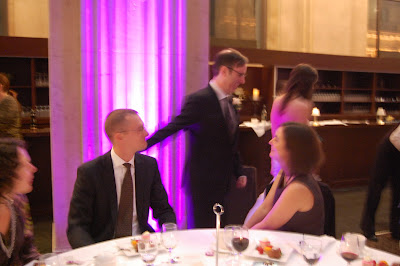 If only we get together for the very important occasions as our lives go whizzing by, then I am contented and happy with that.  I hope they are, too.
Congratulations Greig and Sarah.  If not before, we'll see you at Olivia's wedding.  Or Chip's second!
Posted by Julie DeBrandt Hunter at 1:34 PM 1 comment:

We secreted out of the country this weekend for a wedding in Toronto, leaving our kids alone as one does.   I didn't exactly spread this information around in the week leading up to our departure because I had a little bit of worry and guilt boarding a plane with my passport while my kids were still asleep in their beds.  But they are good and responsible kids who didn't really get out of their pajamas all weekend.  Instead of moping or getting up to no good, they used their benign lockdown to get a lot of homework done, the DVR cleaned out, their rooms picked up and to invent a grilled turkey and provolone sandwich that was apparently delicious.  Olivia being one week from her 18th birthday, we felt confident that our 36 hour trip was a ticketable offense at best.


Or should I say offence?


Toronto is a city in Canada.  And that's all I got.  I had lunch, dinner and breakfast there, plus some nachos when our return flight was cancelled and rescheduled three hours later.   We were there for one purpose only, a free meal with open bar. 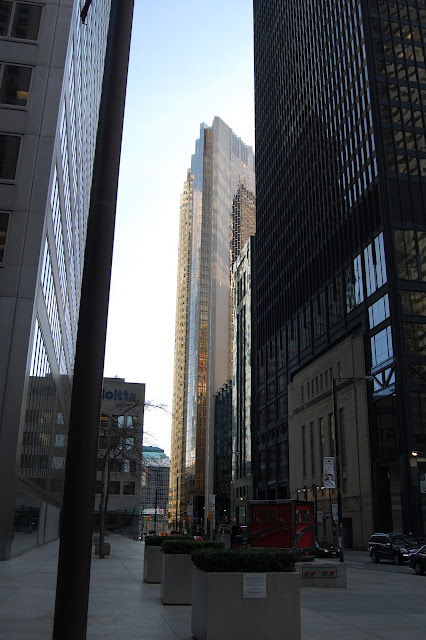 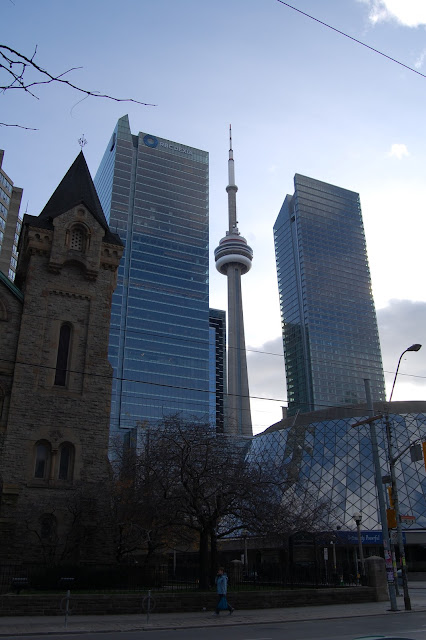 But it's the getting there that makes it interesting.  For a more hilarious account of the new TSA fondling sequence and a more sobering take on the reasoning behind it, read the two links below.


First the funny:
http://www.theatlantic.com/national/archive/2010/10/for-the-first-time-the-tsa-meets-resistance/65390/
Then, the not so funny:
http://althouse.blogspot.com/2010/11/whose-getting-rich-selling-those-see.html


Chip and I opted out of the body splatter or scatter, rather, just to see what it was like to go through the  heightened pat down.  I'm in health care and he's a researcher. We could easily take a pat down.  Do your worst, TSA.  And actually I had my mammogram last week so I thought maybe it would be wise to wait at least a few weeks to irradiate myself again.  I simply asked to go through the metal detector and did so without anybody touching me. Clearly I don't look like a terrorist.  But Chip and his wild eyebrows...when he requested to go through the metal detector, the guy yelled "MALE OPT OUT!"  If you read the link above you will understand when I tell you that the TSA guy moved in like a doctor and did meet resistance on my husband.  The picture below is confusing in that it appears Chip was enjoying the opt out.


In all seriousness, he would not opt out again.  I'll let him weigh in in the comments section about anything I've got inaccurate or incomplete.  His reaction was mixed and I'll put words in his mouth, "wow that was thorough and yet the sad thing is it's still not effective enough because I could have hidden something in my ass and they aren't willing to look there."  He would never actually say that  because he's a classy guy, but he said as much to his unclassy wife who paraphrased it for him.  He described his experience as no "patting" whatsoever since the guy's hands never left his body.  I believe his words were, "It was more of a caress."


Part 2, the wedding!  I need another day to cull the herd of pictures.  A cute flowergirl to start.

Posted by Julie DeBrandt Hunter at 12:41 AM 4 comments:

The Mister is home.  Life is returning to normal.  He's still getting up at 4am and while I should want that to get better for him, really for me, it's nice that the coffee is always ready when I get up....so yeah.
Now I know there's a lot of hard evidence out there that says hearing about other people's dreams is dead boring.  And yet, I shall tell you my dream anyway.

I found myself in a very pleasant, somewhat vintage decored and sunny hotel room, upgraded to a suite because the hotel was all out of regular rooms.  A lot of space, a really big bed with throw pillows for just me (poor Chip, he's been gone so long I forgot to bring him to my dream hotel) and as I looked around I saw what I thought to be a sitting room around a corner.  Sweet!  And so I took a peek around the corner and was surprised to see instead a dining area with a fully set dining room table.  And to the right of the table was a fully stocked bar with a staff bartender and several waitstaff standing with arms folded behind their backs, ready to serve me whatever I desired. Ooh, the ultimate female fantasy...a customer service oriented dream!

It should have tipped me off that I was dreaming because I wasn't particularly freaked out that there were five people in my hotel room that I didn't know about.  I asked why they were all there and one of the guys explained that whenever somebody took this particular hotel room, the staff for the room was called in to work.

Typical.  My psyche had to ruin it of course.  I felt guilty that they all had to come to work on account of just me, and that woke me up I suppose.   Holiday Inn, by the way, called me Saturday night and listened to the airing of my grievances about Weekend at Husky Lodge.  Coincidence?  I think not.  On that front I will not relinquish ground.  They still owe me one hairless, freaked out showdog-less weekend!
Posted by Julie DeBrandt Hunter at 9:21 PM 1 comment:

I'm on week three of parenting alone.  I'm not losing my mind but rather have gone into a one woman zone defense against life to take care of essentials only, and I'm losing the game late in the second half.  Chip is finally back for good on Friday.  That seems so far away right now I'm not even able to look forward to it yet.

Of course, as I do, I set the bar high for absolutely no reason.  I'm still cooking dinner even though I said I wouldn't.  I didn't board the dog at the kennel even though I said I would.  The dryer broke of course because that's how the world works, so I'm hanging the laundry yet again.  I went to PetSmart, Walgreens and Bed Bath and Beyond on Sunday in a succession of errands that need no explanation if you're an American.  I put away the Halloween decorations and got the garden bedded for winter because it was warm on Sunday and we all know that it might have been the last time...for the snows can come at any time once the clocks fall back.  And I'm doing my 40 hours at work which was not something I thought I would be doing three months ago when this trip went into the calendar.

But it's all auto pilot and not a lot of joy goes with it.  It's just all the stuff that has to get done because I'm the only one to do it.  More pioneer woman than super woman.

I'm lonely for Chip but it might be his fetch and run I'm really longing for; ungrateful, selfish wife that I am.  Although, I will say these girls of mine are good to me and minimally pulling their share of the load without much complaint, as well as being very fine company.  There are bright flashes of independence that shoot from beneath their eyelids when they lift them with a wink, like the aliens in Cocoon.  But they don't want to show the bright light to me too much because it just leads to more chores.

My camera is full of pictures that need downloading.  I haven't even bought my book club book for November.  The yarn basket sits full and untouched.  Pictures to be mailed, holiday planning, niece hat to be knit, Vanity Fair with Cher on the cover to be read.  It's that kind of stuff, the fun and frivolous stuff, the creative and artful side of me that isn't getting her due.  And life without the frivolous and the creative is not very merry, but rather quite perfunctory and colorless.

I'll be back soon.
Posted by Julie DeBrandt Hunter at 11:46 PM 4 comments: