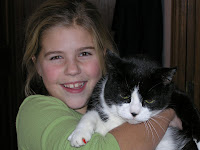 Goodbye my old friend. Left on the vet's doorstep with a broken hip, they took him in, fixed him up and then let him live in the back with the boarding animals. His original name was B-ball. He ate all his food at once, like a dog. He hid behind furniture and ran out to bite our ankles. He destroyed thousands of dollars in furniture. He survived the worst housesitters ever and a case of fleas that seemed uncurable. He snuggled our newborn. He endured our two year old. He watched our children get older and learned to live with all the girls who tried to snuggle him. He sat on the margins of the room but always in the room full of people. He bit us if we petted him too long. He always came to the door to greet us when we came home. He reliably accepted three sibling cats over the years with the same patience and weary acceptance. He endured the addition of a dog. He never ran away and really never went far from the front or the back door at either house. He always had a bumpy and pimply chin. He had two white patches on his haunches. He was always fat but never the fattest. He wore red nails. He always used the litterbox. He never got sick. He caught a few mice in his time. He would run from the room if you yelled "GOAL" like a soccer announcer. He generally made noise when he walked unless he was hiding from the cat carrier--then he could be as quiet as can be. He had his diet changed many times to accommodate all the other pets and he never complained. He woke us up early in the morning by throwing up when he thought it was time to eat. He liked to sleep next to us, but never in our laps. He rarely meowed, even if accidentally trapped somewhere.
He died peacefully.
Posted by Julie DeBrandt Hunter at 4:47 PM No comments: