Will Work for Food 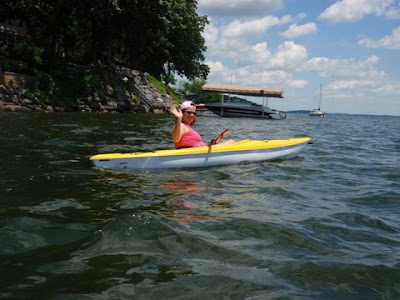 This summer has been an exploration of new ways to trick myself into exercise. Like my snowshoes before it, my birthday kayak has turned out to be one of my favorite gifts ever. Both activities get me out of the house and enjoying a beautiful day of some sort. Whether it's snowy or sunny, I have myself covered.

This morning was yet another gentle and beautiful ride on Lake Mendota with my kayaking buddy, Amy. We yak yak yak in time with our paddling , exploring both the open water and the rocky shores filled with nesting swallows, while the fish of Lakes Mendota and Wingra flip flop around our boats in the early morning quiet. We wave to the many fishermen who don't see much recreational boating during fisherman's hours and Amy hollers inquiries about what they're catching. Sometimes Amy casts for sport with her barbless hook while I float nearby with just the occasional drag of my paddle to keep myself facing the right way for continued chatting. The kayak's simplicity and maneuvering ease, like the snowshoes, are its magic. One push and your out on the water...no trailer, no motor, no fuss and no muss.

Cycling has also been part of my "Getting Fatter with Exercise in 60 Days" cross-training regimen this summer. Chip and I tackled a local bike trail last weekend with real cyclists who dress in colorful nylon shirts and black biking shorts and yell "ON YOUR LEFT" a lot. We chatted and gossiped, often using our hands to emphasize a point and rode two abreast, a complete and utter "tell" that we were so completely unfit for trail riding and should be driven off by serious riders wearing flags around their shoulders and wielding torches and pitchforks and chanting for our blood. Maybe it was the Tour de France that had everybody looking so serious last weekend along the trail, but I would say Chip and I were dressed more for browsing at Home Depot or perhaps paying our utility bill in person. I was sporting yoga pants and a misshapen Limited Express tank top and seriously, a loop of potholder nylon from a child's potholder-making kit to hold my ponytail. God love him, Chip is as fit as any rider out there, but was sitting rather erectly, like a guy from the twenties with a handlebar mustache on a bike with a giant front wheel, dressed for a Jimmy Buffett concert with t-shirt, khaki shorts and TEVAs. No serious riders show their toes while riding, do they? Like dogs, we Hunters always work better toward some type of food reward and made it our goal to finish at a breakfast joint where we scarfed down two giant plates full of eggs, bacon, hollandaise and hashbrowns, negating any health benefits of the ride. Embarrassingly, we ate so much and racked up such a bill that we didn't have enough money to tip the waitress and had to drive back and drop off the tip later. That last piece of information sent Allison into a serious eye roll as she spit out the word that describes her parents' adventures best... "Typical."
Posted by Julie DeBrandt Hunter at 9:53 AM