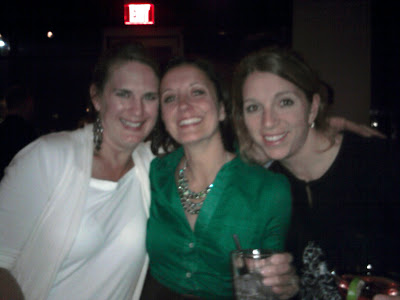 These fabulous women, I am lucky to say, are my friends. The one in the middle just had a birthday and we celebrated with her this weekend about a lot of things besides turning 40.  We’re a close knit group of friends at this point in our lives as most women are and it’s not an obvious mix of similars.  How we all became friends is a maze of connections that would require a geneologist's hand to unravel.  But only a few of us hail from here so it's a "love the one you're with" arrangement that took wing.
Is a woman of a certain age at the height of her connectedness with the world?  I have a thread of affiliation with most everyone I see as I move about my days in Madison.  Given one can't gossip in a restaurant here without fear of someone overhearing,  I consider the obvious explanation of a small town but it doesn't fully satisfy as the only reason.  I think it has more to do with the tentacles that grow from a critical mass of relationships at this stage of life. Children, work, community, spouse… and in that order I suppose.
The old biddy table, where I was sitting before I took the photo 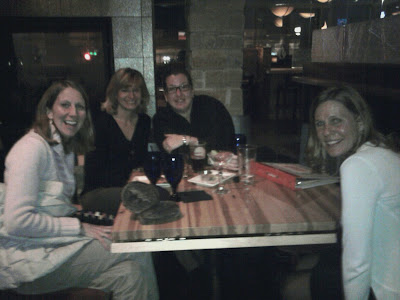 I don’t think about age differences too much in my relationships with other women except when we discuss music or current events of the late 80s.  Some friends remember high school while I remember being married and then it sort of hits me that I might have easily been their babysitter at one time in my life. It feels like half of my friends are turning 40 while the rest, like myself, are staring down the slaughterhouse chute at the big 5-0.
There are obvious big differences in our lives day to day based on our children’s ages and the state of our careers but as women we’ve found the common ground on which to build deep abiding friendships…and that fertile loam is saturated with wine.  I'm akin to a daffy great aunt who can’t absorb or retain details about birthday parties or favorite Pokemon guys anymore and pays kids a dollar to leave the room.  The current working theory is of course, flagging estrogen levels.  Where I used to know everything Toys R Us, I now peruse toy aisles with wonder and a thirst for knowledge.  I shiver at the notion of attending elementary school anything.  I curse like a sailor no matter who's in the room.  I'm almost dangerous to small children in my inattentiveness.  I enjoy the chaos and clatter of families half a generation behind me and when I’ve had enough I can turn on a dime as quickly as I can whip around the minivan to visit a friend on my side of forty whose kids are nowhere to be found and where we can sit and drink a quiet glass of wine, discuss civilly and thoughtfully the events of the world around us and most importantly, speculate fully as to why her college-aged son has un-friended me on Facebook.
When I was a kid, my mom had an older friend who affectionately called all us kids “dolly”.  I’m starting to think it was because she never really knew our names.  I'm almost there.
Posted by Julie DeBrandt Hunter at 12:44 PM