Is it ethical for a hotel chain to take your reservation online without letting you know that your hotel will also be hosting 5,000 huskies on the same weekend? 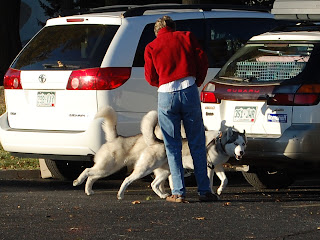 Liv and I set off for Lawrence, KS a few days ago for Senior Day and due to my stubborness about avoiding highways that are orange in the road atlas despite their being more direct, we arrived late to our hotel.  Forebodingly too late.  Something felt immediately amiss in the parking lot as we got out of the car.  Lots of movements in the shadows.  A person walking a dog...ok, pretty normal.  But then another and another and as our eyes adjusted to the dark, we realized the entire parking lot was full of people walking dogs.  And all the same dog!  It was one of those experiences where you actually kind of take a little step back from yourself and ask yourself in a quick 10 second review of whether you're in danger or not, "am I seeing what I think I'm seeing?  I have no frame of reference for what I'm seeing.  do we need to run?"
﻿
﻿

"Your room is 433 and we apologize for the hair and the noise."   Say what now?
The Siberian Husky Judges Education Seminar and Breed Study in conjunction with the National Specialty competition was being hosted by our hotel.  A hundred dogs or more IN the hotel, IN the beds!  We apologize for your being unable to breathe due to your allergies and asthma might be a better standard wish for hotel guests. 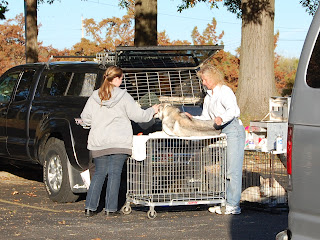 I've been to a lot of hotels in my life.  A lot.  I love not camping.  So, I generally enjoy a new hotel experience...like sports teams staying in the hotel or prom being held in the ballroom or weddings and other human activities occurring during my stay.  Even the occasional yorkie or pomeranian in its own stroller makes my day during a hotel stay.
This gathering, however, was a freak show to end all freak shows.  Packs of dogs in the elevators, the corridors, the lobby, out of crates and lying on beds in rooms as seen from parted window shades.  Apparently showdogs have more important work to do than learn to go through doors with their masters or approach strangers only if invited or most audaciously not to jump up on kids holding an interesting Diet Pepsi and minding their own business.  Not even a yank of the leash but a rather bored and half-hearted "Don't do that, Snowy."  Are you f'ing kidding me?  Your dog just jumped on my kid!  On Earth, we don't generally like it when dogs do that.
Around every corner, every elevator bank, every door, every column lurked yet another husky dog if not two, leashed to an aging, fussy woman, possibly in a motorized wheelchair, frocked in a denim prairie dress with an airbrushed head of a husky on its pinafore, barely in control of her disastrous wardrobe choices yet alone her massive dog(s).
It was a little depressing watching these confused, skittish and high-strung animals bred to pull sleds and work in teams misbehave for their scary pageant mothers who treated them more like naughty toddlers than animals. If you know me even a little you know corporate Holiday Inn is going to here about it all...how could they not?  I'm getting a free weekend somehow or this blog is going to turn into the Michael Moore of blogs bent on bringing down a giant in the hotel industry and the AKC.

Husky dogs aside, we had a great Senior Day at KU and I did try hard not to cry during the little motivational movie they show to prospective students and their parents but again I was unsuccessful and got a little headache from stifling the tears.  That makes three for three.  These movies are genius marketing tools to lure in parents more than the kids.  I swear I don't want to go back in time, but I did really enjoy the rituals and traditions of college life.  How could a person sit stoically as "rock, chalk, rock, chalk" is being chanted in unison by thousands of students?  I'm not a robot, man!
Oh, and the pregnant mom touring KU with her daughter was not weird at all.  It did, however, require college level logic and math just to think about how it was even possible and what she might have been thinking.
Posted by Julie DeBrandt Hunter at 10:13 PM