Health care reform is not good for my health

My friends may be happy to know that I made a pact with myself last night never to speak about health care reform over food and drink again. I promise to listen and nod and be polite, but no more me with the talking. Trying to "solve" American health care over dinner leads to indigestion and 2a.m. recriminations about my argumentativeness. A group of us meet occasionally to talk politics and generally are in agreement on most issues but the revamping of health care has us stumped and me feeling defensive over the finger pointing at providers. What can I say? I'm loyal to my peeps. It all feels like we're speaking from the personal when we talk about where we need to go from here.

It remains a puzzle how Congress sitting on opposite sides of the aisle is going to find a compromise to put forward to the public when our little homogeneous group has trouble finding a common place to start the cuts. The change in culture for all Americans around health care spending when it comes down to the personal is a two-generation initiative and we don't have that kind of time...a family member's last days cut short by spending caps, a bone marrow transplant denied to one's child, one's own knee or hip surgery scheduled eighteen months out with only the powers of Motrin to keep one's mobility in the meantime....who will be the first to be denied the kind of outrageously immediate and costly care to which we've grown accustomed and that has become an inalienable right in our minds? And where to begin dismantling the graft and the corruption and the fraud at so many levels? I woke up feeling somewhat disappointed that I wasted my precious minutes with these fun friends arguing probably an indefensible position practically speaking, when I could have been enjoying my delicious carnitas discussing Mark Sanford, Michael Jackson, Farrah Fawcett, Ed McMahon, Billy Mays and Bernie Madoff. So many scandals, so few dinners. 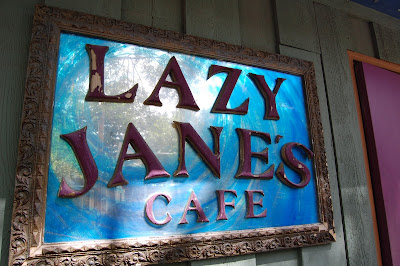 So, nothing else to do but move forward in search of more delicious food today. Unemployment without true financial worries (yet anyway) has left me little choice but to dedicate at least a few hours a week to healthy living as a virtuous endeavor in an otherwise decadent lifestyle....P. O. P. (Problems of the Privileged) As I hate to exercise, trickery and food are generally involved in getting myself moving. Like a greyhound at the track, I need to be lured toward my goals by the promise of a juicy bunny to chew on. A few friends introduced me to a lovely and here is the key word, level bike path that cuts across the city and the Isthmus almost directly to one of my favorite places to eat in Madison, Lazy Jane's. It's a Willy Street staple for joltingly good morning coffee, scones and cooked breakfasts. When your breakfast is up, the cook screams your name in a baritone caterwaul that shakes the rafters--"JUUUUUU-LIE!" "ALLLLL-I-SOOOON!" It's a fanciful place with delicious food and funky folks and worth the 19 mile bike ride for the promise of a blueberry scone. 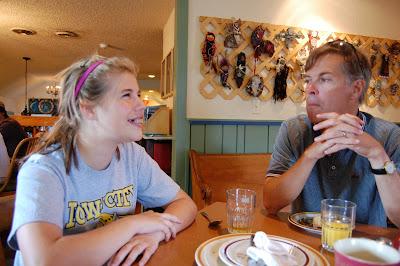 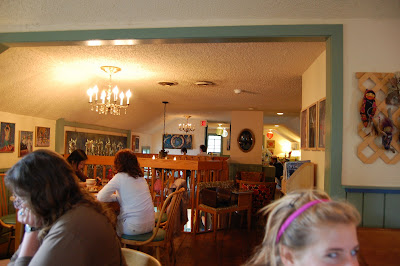 Chip and I always ask the girls to come along on a family bike ride for our own amusement just to see the facial expressions of horror. But not today. Ally surprisingly agreed to come along largely because she was hungry but also confident that the ride would go unwitnessed. "It's the east side of town....none of my friends will see me." Hey, we'll take the love where and how we can get it.
Posted by Julie DeBrandt Hunter at 11:45 AM