The Jersey I know and love

I found myself searching for the right words to explain "my" Jersey shore to a friend who’s never been.  What makes it special?  Because I can smell funnel cake on the wind and hear the blood curdling screams of children being flung about sketchy amusement park rides from my beach chair? Because being physically trashed by dangerous waves is awesome?  Because I like to walk and eat from a gigantic tub of caramel corn as an appetizer to my dinner?  Because I like to whoop my kids' behinds at miniature golf?  Because I love low flying planes that drag giant banners advertising lobster dinners and five dollar “Pink Grenades” at the bars in Wildwood?  How do I love thee?
I’ve been going to Ocean City, NJ since I was a kid.  My friends and I would swim by day and swarm the boardwalk at night looking for good old fashioned boy-girl fun.  During the day we played miniature golf and rode bikes and body surfed.  At night, we put on our lip gloss and sweatshirts, preened for the Jersey boys and ate pizza. Later as high schoolers, we smuggled in beer and drank til our eyes flew at half mast meandering through the streets looking for kids we knew and parties we weren't necessarily invited to.  Nothing too messy, just standard fare in the late 1970s.  Why high schoolers picked a dry town to party in I've never really understood.
I am an Ocean City legacy.  My dad went there as a kid and my aunt and uncle own a house there now.  My own kids have vacationed in Ocean City since they were born spending at least a week there almost every summer.  I love tradition and never feel like I have enough of it going in my family to my satisfaction.  Norm on Cheers lived a perfect life in my eyes and that's always made Chip grow a bit quiet.  He and the girls generally like to try new places and new things on vacations rather than the same old same old whereas if I had my way we’d have long ago bought a summer house (with magical money that is part of all fantasies) and vacationed the same week in the same place our whole lives.   I married the wrong guy and had the wrong kids again—typical. 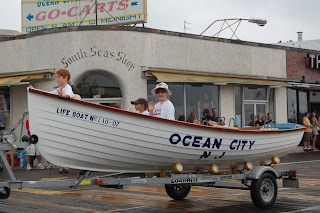 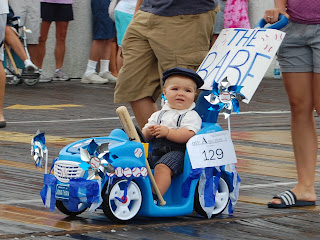 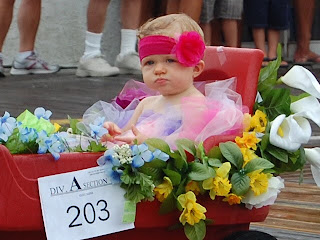 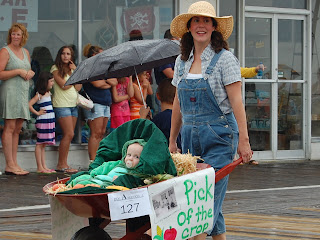 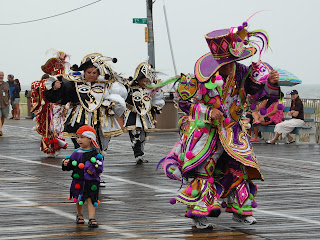 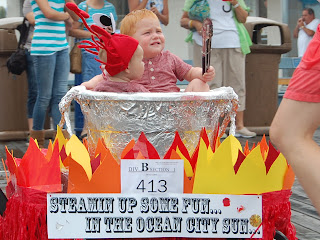 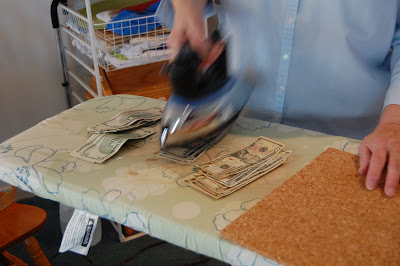 There is one more key element to the Ocean City experience for us.  Her name is Aunt Polly and she irons her money… before slipping it in your pocket.  She runs a teenage fantasy camp first for me as a young adult and now for my kids each summer which this year began with a hug and a fifty dollar bill.  She waits on us breakfast, lunch and dinner and stocks all our favorite treats.  She does our laundry daily.  We watch loads of Law and Order and Seinfeld reruns after as many lazy days as we can get baking and swimming at the beach.   She takes us to Atlantic City where we park the girls in a cafe and throw a few quarters in the slots before hitting the buffet, her treat.  All in all, it’s over the top pampering. It's an adolescent spa with full and I mean FULL cable on three TVs, no bedtimes and unrestricted and wanton snacking.
10pm: “Have a snack.”
10:15pm: "Did you have a snack? Why not?"
11pm: “Do you want some candy?  How about a piece of pie?  Well, have another one.”
Midnight: “Are you sure you don’t want a snack before bed?”
It’s absurd and perfect.  We ate ourselves silly... from funnel cake to Mack and Manco pizza to Kohr Bros. soft serve, Shrivers strawberry laces and Primo's hoagies.  A feast of sugar laden delectables and fried and fatty turbocarbs eaten mostly on the run.  Nobody sits long at the shore when eating.  The seagulls will get your food. 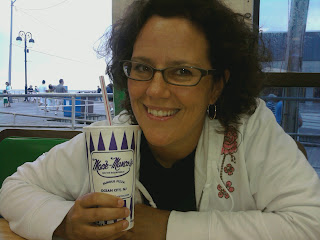 We rode the rides at Playland and this year I couldn’t have asked for a better gift from the girls than when they said, “C’mon Mom.  You have to go on the rollercoaster.  It’s our tradition.”
Posted by Julie DeBrandt Hunter at 10:16 PM