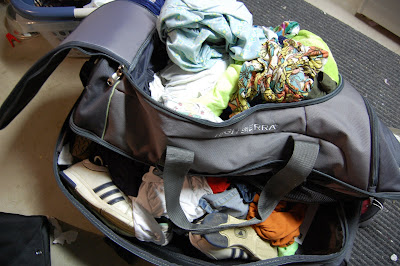 Ally returned yesterday from her first year as a camp counselor.  I've put a positive spin on the putrid laundering that follows each camp week which is that going through the suitcase provides insight into the murky details shared....a burned candle, grass, mud, dead spiders, unused stamped envelopes, a picture.  Sanctioned snooping and there was nothing interesting or incriminating...really a little disappointing.

As I drove her and her friend home from what was described as a really great week, I was struck by how ridiculously negative their conversation was.  I guess keeping a cork in that social bottle for six days resulted in a profound amount of pressure that needed release.

"She acted like she didn't remember me from last year.  She asked me what my name was, can you believe it?  And in my head I was like, 'Shut up Bethany.  Last year you wanted to be me."

Like adults going for a job promotion, they had been on their best behavior trying to impress the big counselors and the camp staff grown ups with their positive attitudes and helpful natures to better their chances of being chosen again as counselors next year.  That's a long week of holding in every negative thought about other kids, and there are a lot of those thoughts right now.  Negativity rules.   So for 90 minutes in the car they poured their hearts out to one another about their frustrations over the course of the week, laughing uproariously and being incredulous at every social faux pas committed by other kids as I drove in silence listening to their debriefing.   That's what Angelina Jolie told me to do...stop talking and listen.  What, isn't Vanity Fair where everybody gets their parenting advice?  Constantly reminding myself to shut up and drive rather than interject and share is frankly an exhausting way for me to live.


Case studies suggest that adolescent peer groups are also characterized by exclusivity, impermeability, and hostility toward nonmembers (Cusick, 1973).
http://www.du.edu/psychology/relationshipcenter/publications/pdfs/Agedifferencesinadolescents.pdf
Being a grown-up girl in my own family,  I think we may need to work out the complex social dynamics of society in preparation for navigating the bountiful yet treacherous waters of adult social life. Women are cruise directors.  We facilitate and encourage passengers to interact and play well with one another while trying to ensure everyone's safety.  We remember the birthdays, the anniversaries, the get well notes and the teacher thank you gifts.   But do we have to get down in the mud first as teenagers in order to function as the social caretakers we become as adults?  Coach Chip and I have talked a lot about this as once upon a time he watched his happy little team of girl buddies devolve into a group made of individual diva princesses delivered to softball tournaments in their own white-stallion-drawn minivans manned by beleagured mother footmen.  The social fabric was tattered for one very long summer as the games began.  Impermeability, exclusivity and hostility, you aren't kidding.  A means to an end?  Arguably, perhaps. 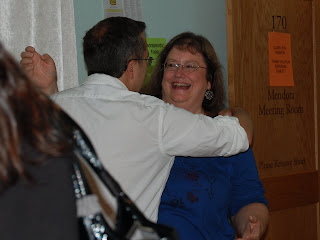 A 50th surprise birthday party held in a public space for a friend whose adult siblings and friend co-conspirators planned and executed a surprise so massive she literally wouldn't enter the room, mistakenly believing she would be interrupting an adult education class.  She actually was so non-compliant she went missing in the building for a few minutes.  But she was finally and reluctantly dragged into the room to realize we were not a Zumba class but a room full of friends and family there to celebrate her birthday.   I don't think I'll live long enough to sufficiently exhaust the possibilities of teasing around it. 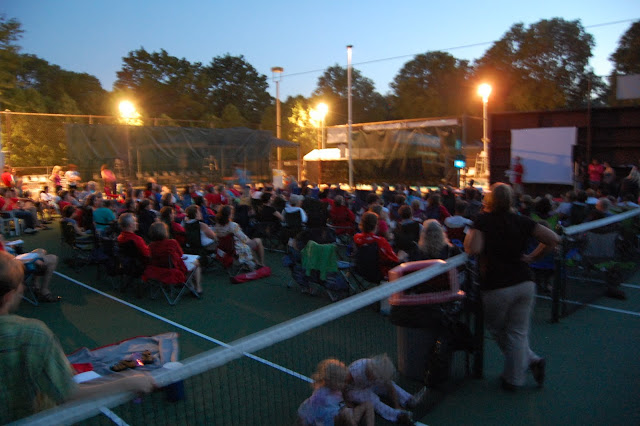 The night ended with a pool drive-by to catch more than I intended of the achingly (literally, people were getting up in pain and doing stretches against the nets) long-winded summer swim season banquet.  My pals below, youngest siblings each in housefuls of swimmers, sum up my take on the speeches but the slideshow finale of a hundred plus kids that populate my world made it truly worth the seven hours of thank yous.