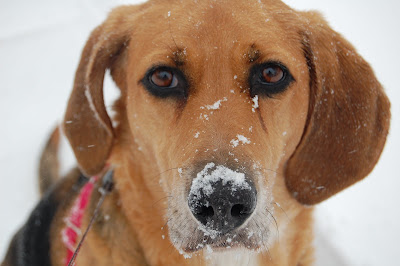 The weekend before Mardi Gras. Granted we had seven inches of snow Friday night into Saturday. Granted we live in Wisconsin. But if you've ever lived in New Orleans, you have this sense that there is a giant party going on without you and it's irksome. I haven't been to Mardi Gras but a few times in my life and still.... There's a party goin' on without me!

First, I take Minnie for a romp thru the snow. She meets her friend Kate. I stop to take a picture and accidentally drop the leash. She makes a power dash, as she does, down the street, leash bouncing behind her like a jet ski, until thankfully the leash gets tangled in a bush. I can't catch her when she decides to run. And she always decides to run. I can't even get mad because she loves snow that much. 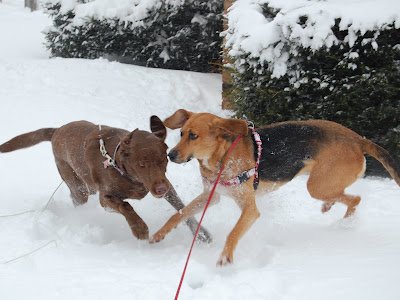 Back home, we haul out the beads, the Crystal, the file' and the pepper and make some gumbo and jambalaya. The king cake we bought from a local bakery. I made it one year and the taste was good but it did not look pretty. Like the king cakes ordered in the mail, the green sugar resembles a whole lot of mold and mine was a green hot mess. Lots of beer, wine, food and great friends help make our own little carnival. It will surely do as a substitute for the real thing. 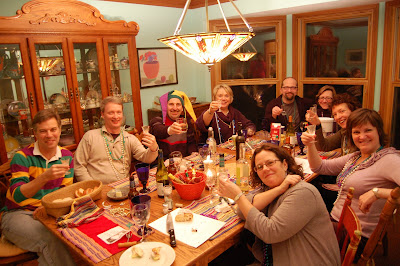 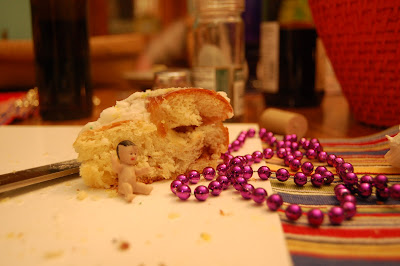 All was well until the presentation of the Best Supporting Actress award when I thought I might have to shoot the television a la Elvis. What a buzz kill on an otherwise delightful weekend. The Oscars sadly have jumped the shark.
Posted by Julie DeBrandt Hunter at 8:11 PM