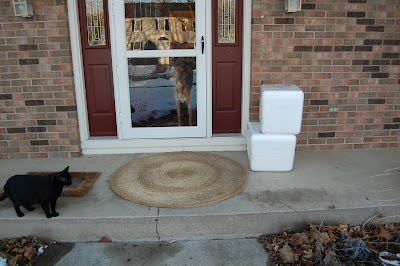 As we pulled into the driveway, we noticed two Styrofoam boxes on the porch. I realize now we watched too much CSI in England as Olivia yelled, "Mac Taylor sent us body parts!" But no. Two boxes of Omaha steaks. It reminded me of last summer's meat party.

February is a good time to reminisce about summer. Our backyard is one of four yards that all touch, making an L shape and insulated from traffic and the greater world at large so that even the little ones can play out back loosely supervised by the bigger ones. In good weather, the kids migrate through the yards for various games depending on desired terrain--hilly and woodsy for Hide and Go Seek, flat and open for Baby in the Air, or swing set gymnastics for a break from the running and arguing over who cheated in which game. There is screaming from sun up to sun down in summer in the yards. Like when I was a kid, but without cigarettes.

When our girls were younger, they would literally come in the front door after school, shed their coats and backpacks as one unit sliding off with the weight of the day, kick off their shoes and proceed directly out the back door without ever breaking stride and yelling behind them, "I'm going to play in the yards." If you didn't witness the seamless transition, you'd think they had been vaporized on the foyer carpet. On lazy Saturdays, Ally would wake up, listen for kids out her window and proceed directly down the stairs and out the back door in her pajamas to play. All the moms took turns bringing out the feed bucket of Wheat Thins or cut up watermelon to placate the horde and prevent any movement indoors. Sometimes they would all play until well after dark on summer nights and come home bug bit, filthy footed and smelling of grass and sweaty heads. It was a great consolation prize to leaving the city, that my kids were finally getting properly good and dirty from playing outside. Not dusty and covered in sticky greasy grime from pollution, chewed gum and spilled soda on the Philly playgrounds.....but the dirt that comes from running through cut grass and digging in dirt and blowing fresh air and lawn sprinklered clothing gone wet and dry on their bodies and sticky Popsicles and sweat, all making for that salty sweet summer kid smell that is dear and nostalgic and completely gross all at once.

A new development of recent summers...Lord of the Flies 'Sconnie style.

The next generation of yard kids is mostly boys and they cannot seem to keep their shirts on. They shed those shirts as soon as we break 50 degrees and wield sticks and light sabers and toy guns and run and scream and generally terrorize everything in their paths, especially sisters and bugs. As I look out my kitchen window at all these shirtless boys, I see how the idea for the book came along. I love them all individually as one might do with an individual wolf or hyena cub, but when they run together as a pack, well, I throw the latch on the back door just in case. 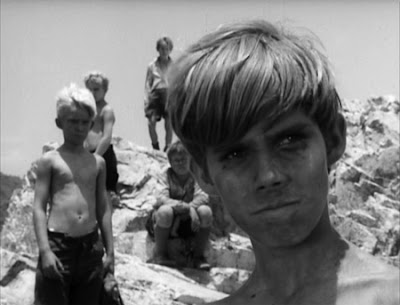 Last summer, before our sabbatical, we had a freezer full of meat to purge. I married a meat squirrel. Loves to buy it and freeze it all year long. So, a meat party in August--brats, chicken, hotdogs, hamburgers and the remaining Omaha steaks sent from Christmas 2007 for friends and neighbors. And all the little Lord of the Flies boys came with their shirts off. And when asked for their dinner preferences, one by one they responded, "I'll have steak." Of course. The adults ate the hotdogs.

Uncle Mike has generously sent a big new shipment of Chinese New Year Omaha Steaks. They will be hidden from the pack until we get our share.
Posted by Julie DeBrandt Hunter at 6:15 PM