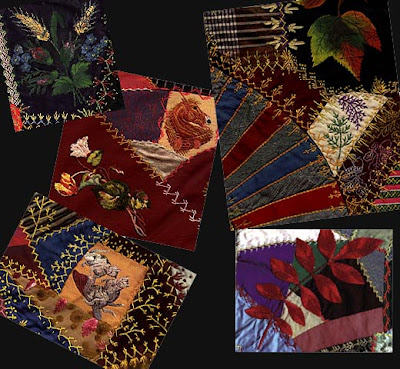 This poem is reprinted from Good Housekeeping, October 25, 1890.
Excerpted from:
The Crazy Quilt
And where is the wife who so vauntingly swore
That nothing on earth her affections could smother?
She crept from your side at the chiming of four
And is down in the parlor at work on another.
Your breakfasts are spoiled,
And your dinners half-boiled,
And your efforts to get a square supper are foiled
By the crazy-quilt mania that fiendishly raves,
And to which all the women are absolute slaves.

And thus it has been since the panic began,
In many loved homes it has wrought desolation,
And cursed is the power by many a man,
That has brought him so close to the verge of starvation,
But make it she must,
She will do it or bust,
Beg, swap, and buy pieces or get them on trust,
Oh, the crazy-quilt mania, may it soon cease to rave
In the land of the free and the home of the brave.
-Anonymous

I'm awestruck over a fad that happened over a century ago. Victorian crazy quilting swept the nation in the late 19th century like scrapbooking has swept the nation today. Women were obsessed with making these quilts that it reached a pop culture status of its day. I read about an exhibit at the School of Human Ecology at the UW in the paper and went to see it today. I don't know what Human Ecology is but it has a building.

The quilts are indescribably elaborate with layers of embroidery, photo transfers, appliques, and a pattern that is reckless and orderly at once. There is an obsessiveness to the stitching that is positively manic. It was a fanatical pursuit, and women would scrounge for swatches of any interesting fabric they could get their hands on....even if it meant tearing it from another person's body. Women were known to rip apart men's hats for their silk linings and it wasn't clear that they always asked the men before doing so. The industrial revolution brought textiles to another level working with fabulous new textures and designs of fabrics, most of which don't even exist anymore. At the time, collecting fabric pieces was the rage and women went to all sorts of lengths to obtain swatches of fabrics to put in their quilts. Montgomery Ward finally got sick of it and made it plain in their advertisements that "swatches would be sent by request but not of any size usable for crazy quilting."

I still have a bin full of baby clothes because in my fantasies where I know how to do stuff without putting in the effort to learn it, I am going to make a quilt for each girl. It's like my fantasy about Pilates. I'm really quite good at it in my mind. My core is tight. Crazy quilting seems a possible pursuit for me as I do enjoy knitting and running the sewing machine occasionally, but then I remember I'm me....once someone walks into the room and turns on the TV or someone calls me to come over for a glass of wine, that project's going to get put down indefinitely. I have two good hours in me as craft projects go and then I need a long break...sometimes months.

I talked to the student working the exhibit desk as she sat sewing something in the color protective low light of the exhibit. Aaah, young people eyes. I remember them...I used to have them! Walking around the exhibit was like one of those learn about the human body experiences in a natural history museum...the amazing macular degeneration simulator.

I asked the student what she found most amazing about these quilts. She said she couldn't believe they were done by hand and that they took, in some instances, an unimaginable 1,500 hours to complete. She laughed and we agreed it was possible when I pointed out there were no TVs and computers and no jobs for women. It seemed far too possible that the over-obsessive nature of this quilting craze was perhaps a sign that women were restless for serious and heartfelt occupation beyond mothering and housework, an occupation that was creative, innovative and challenging. I like to think maybe Suffrage replaced the obsession of crazy quilting as the new passion of women of that era.

Will my great granddaughters go to a scrapbook exhibition in 2100? And will it be as remarkable?
Posted by Julie DeBrandt Hunter at 7:24 PM