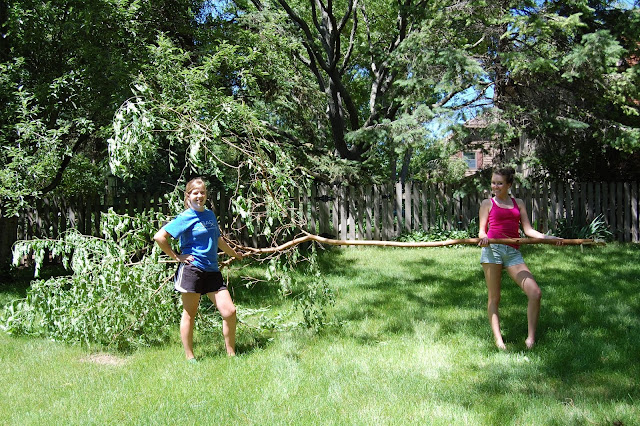 So many reflections about a day that started like any other but quickly dissolved into an axe wielding frenzy.
I don't think it's a part of ourselves we ever really talk about with one another but I've been to your houses and I know you move large pieces of furniture by yourself just like I do so I don't think it's just me.  Instinctively and impulsively and at times randomly, we decide we must move something right now.  Sometimes I've thought about it beforehand but haven't been so moved yet to do it and sometimes it's a new thought completely.  But when the will and the way cogs mesh on any given day, there's little that can be done to redirect me until I get it done.  I’m rarely if ever put off by tasks that seem too heavy or too big or too improbable to pull off.  Last week it was rolling a giant leather chair up the basement steps.  Today, it was tree removal. 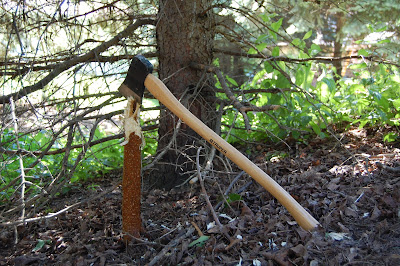 This morning, like many mornings this spring, I was greeted (for the last time as it turns out) by a smug, weedy tree sticking out tall and green through one of our evergreens.  The cheek of it!  It had nurtured itself unnoticed beneath the evergreen branches like a fragment of Voldemort, surreptitiously developing a proper trunk and branches and stuck out through the middle of the evergreen like a bratty kid’s tongue.  The nyah nyah mockery of me had finally taken its toll.  Its life would end today.
A little history that pains me to reveal is that these kinds of weed trees were all over West Philly and I loved them because they were green.  They filled in the cracks of the concrete and the crumbling buildings and vacant lots and covered the graffiti nicely.  I told myself they were trees anyway.  But in a pedigree landscape, they look like the mutts that they are.  Today was finally a day of action.
I wandered off the porch and down the hill in my pajamas like a sleepwalker.  My mom looked worried, as she usually does when I get that look on my face.

Mom. “Where are you going?”
I didn’t quite answer.  I walked straight into the evergreen to face my enemy.  It was not to be a clipper mission I came to find.   I came up the hill and headed for the garage.
Mom.  “Where are you going now?”
Me. “To get the axe.”
Mom. “WHAAAAT?  Oh, Lord…..you’re going to hurt yourself” 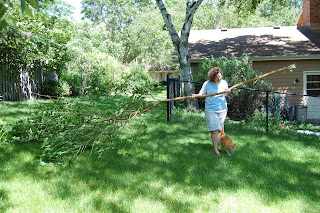 Bruce congratulating me on my tree felling
A few years ago, Chip’s stepdad gave him an axe for Christmas. Naturally I was suspicious.  There’s a lot of evidence on Dateline NBC that suburbs cause men to kill their wives.  I’ve been lucky so far but I sleep with one eye open at all times.
Still clad in pajamas and untrussed, as it were, I set out to the side of the hill with my axe, my clippers and my phone.  My mom’s a panicker so I was pretty sure if I hacked my leg off at the shin it was going to be on me to call fire/rescue. 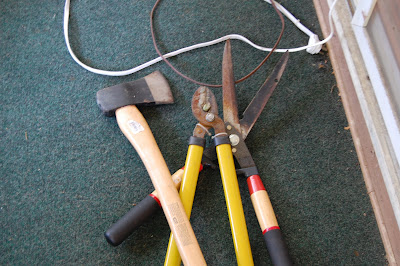 It wasn't exactly Braveheart but by the time I was done, my hair and face were painted with sap. I hacked and grunted and cursed and hacked and rested and hacked some more.  Not sexy.  Finally with a few twists I heard the satisfying rip/crackle of the last bits of cellulose busting free from the stump.  I’m pretty sure I called the tree a motherf*cker in my triumph which I think only my mom heard but can't be sure. What I am quite sure of is that I looked half insane and can't imagine anyone would have come out of their house to confront me on my language while I stood half nekkid before them with an axe in my hands. 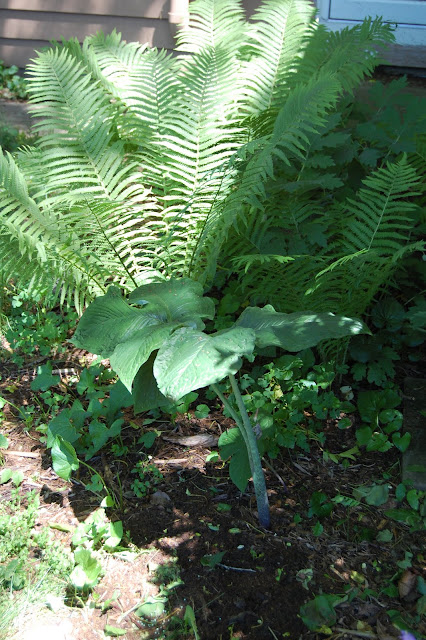 My jack in the pulpit watched.  I love him and will never take an axe to him.
Reflections on axe wielding.
Posted by Julie DeBrandt Hunter at 6:00 PM