If out of town guests are good for anything it’s that they always get me to those places I’ve yet to go.  It’s a little tricky with my mom having visited regularly for the last eight years because although she still can’t reliably pronounce most of them, she’s been to most of the sights of the region.  We’ve done art tours, festivals, small towns, big towns, Ho-Chunk, Taliesen, House on the Rock, downtown, both malls and plenty of softball fields.  I shake the keys and Mom comes runnin’.  She’s a lifelong non-driver who rides shotgun with enthusiasm and wonder wherever we go.  She has no urgency because she still thinks it’s just marvelous that anybody knows how to drive a car.  She never really knows where we are but it's of little matter to her.  I could drive around the block a hundred times and she’d find a new thing to spot out the window every time. 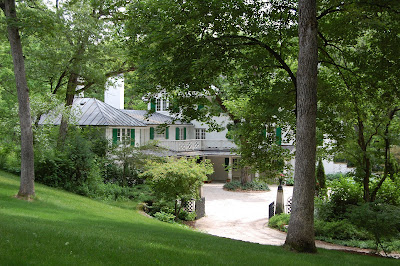 Ten Chimneys, Alfred's aesthetic choice for a name even though there were nine at the time and as many as 11 or 12
This week we visited Ten Chimneys, the lifelong family home of Alfred Lunt and Lynn Fontanne.  Alfred and Lynn were probably the most famous stage actors of American theater from the 1920s through the 1950s performing in 24 plays together and the toast of Broadway for much of that time.
Tucked into the countryside outside of Milwaukee, the home sits in the town of Genessee Depot, Unincorporated.  Not sure what that meant back in the day but I know it now means it’s a pain in the ass to try and start a business there...that is to say if you talk to the newest shop owner in town.  You can easily miss the sign for Genessee Depot and the town itself for that matter.  After winding off the highway through miles of rolling farmland (now dotted with awkward beige housing developments named lamely Country Meadows and Rolling Hills-ish type names), there’s a sharp left onto what feels like a promising main drag that quickly fizzles into rolling farm land again.  However, if you make a right at the turn, you amble into the woods and therein lies Ten Chimneys. 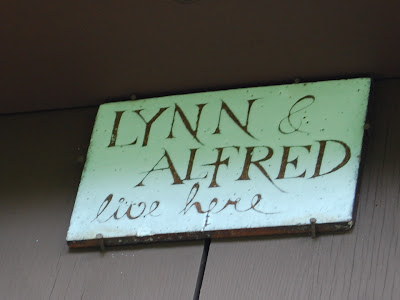 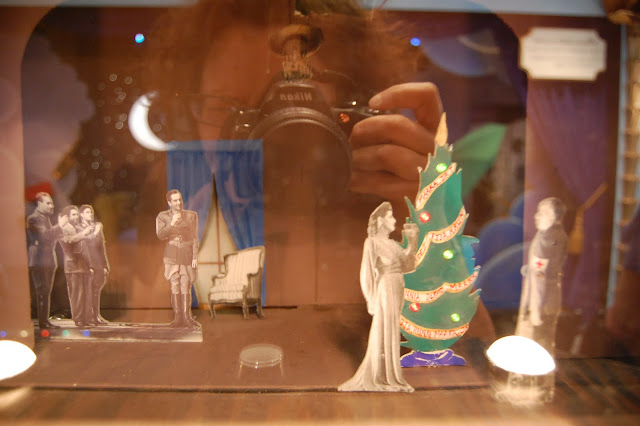 Dioramas tell the tale in the visitor's center
The family house started as a place to stash Alfred’s spendthrift mother away from the shopping of downtown Milwaukee.  Soon after they were married, Alfred and Lynn made Genessee Depot their annual summer home to relax, play farmer and be celebrity hosts to the literati and fellow actors of their time:  Noel Coward, Carol Channing, Helen Hayes and Lawrence Olivier to name a few.  Although not included on the tour, there is good information that the compound in its heyday was a destination of wild sexual decadence.  It would seem given the house has only four bedrooms and they reportedly hosted a multitude of guests each summer, the math suggests there had to have been some doubling and tripling up.  Just sayin.  Also Noel Coward liked to walk around the grounds naked causing at least one cook to quit.  But that’s as racy as the tour got. 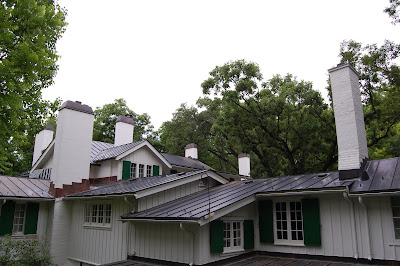 Six of the ten
What I took away most from this tour was that despite their fame and the adulation of their peers and their fans, they maintained a lifelong commitment to their leisure time.  They never acted during the summers so they could travel to Wisconsin and recharge their creative and personal batteries and build more chimneys.  Then they did something really radical.  They retired to Ten Chimneys in 1960 and enjoyed 17 more years together before he passed away.  She died about six years later.   Our trip was a great segue to my own annual summer recharge in beautiful southeast Wisconsin.  If the Lunts could enjoy their summers off, then so will I.  Maybe I’ll return to Broadway in the fall.
Posted by Julie DeBrandt Hunter at 11:33 PM