A day in the souks 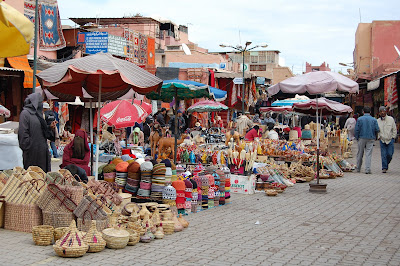 I've seen Monty Python's Life of Brian. I thought I understood haggling. The souks are a labyrinth of alleys, claustrophobic at times, beautiful and full of color at other times, but certainly the beginning of a bad acid trip in a lot of ways. First, there are the smells of spices, incense, leather and oils. Then, there are the hordes of people, mostly locals, with entreaties in many languages. "Ola" "Bon Jour" "Where you from?" "You want look?" "Say hello to Denzel Washington, and Bruce Willis and Morgan Freeman and Angelina Jolie for me. I like her." "What is your name? Sara? Sara?" Sort of all over the map, sometimes just for their own amusement.

A guy reached out and touched Ally's hair and a monkey jumped on her arm. Tough travel for blondes. 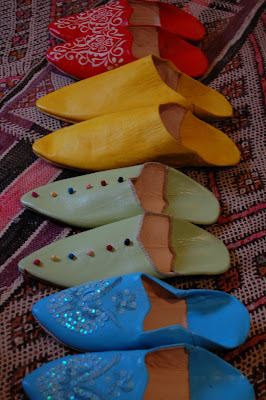 So here's the haggle in a nutshell. He brings you a chair. You must sit before you can properly haggle over the baboushes. He starts with a price written on paper. It's too high (although by US dollars, it's only about 100 bucks). You counter with what seems an insulting figure--it's not Western haggling, you don't meet in the middle--AAACK. He smiles. He counters, you counter and so it goes, until finally he gives the last offer. You take it. And you're still the loser. Everyone says thank you, money is exchanged and he shows you to his buddy further down the souk.

Chip watched from my key mistake with the baboushes and makes his second counter offer closer to his first. He ends at a price closer to what he wanted in the end. He also gets the ultimate compliment. "What, are you Berber man?" The Berber settled this region in 1057ish. I am bitter. No Berber compliment for me. 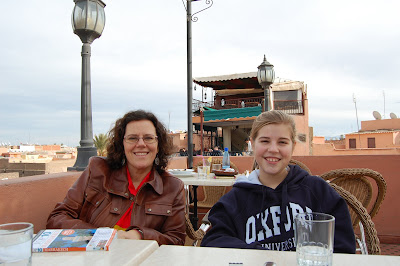 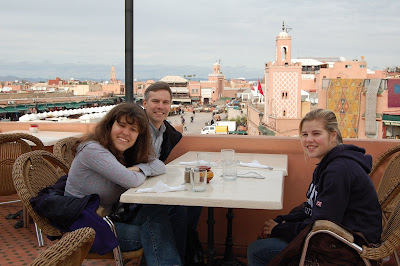 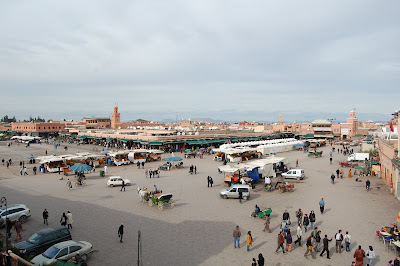 I felt sick to my stomach after a few hours in the souks. Even dizzy. A coke and a bird's eye view of the Jemaa-el-Fna and all the madness temporarily eases the feeling. In addition to the souks, there are the snakecharmers, the watergivers, the henna women, the donkeys, the carts, the scooters, the bikes, the monkeys, the acrobats.... For a person such as myself who learns by watching, it's just too much. I feel a stroke coming on. 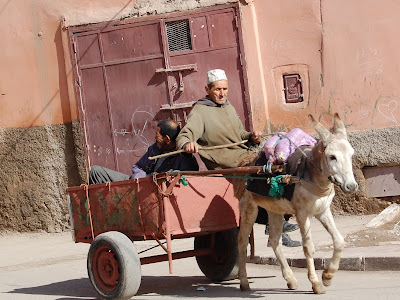 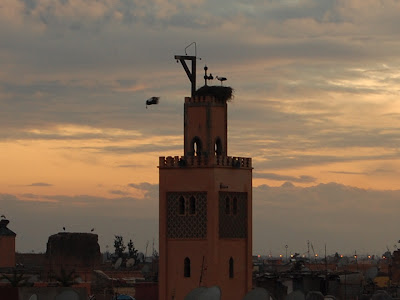 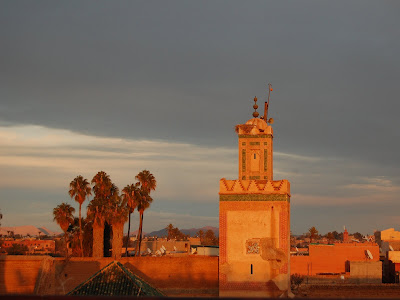 Back to the Riad for afternoon tea, the sunset and some rest. 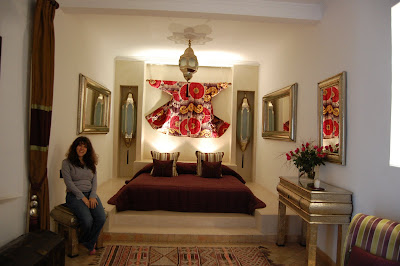 Not bad sleeping tonight. I think I'll be fine. That's my room, by the way.
Posted by Julie DeBrandt Hunter at 12:19 PM