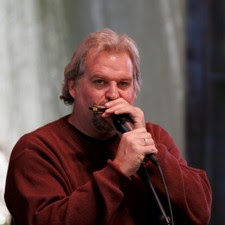 Another jazz fest in the books. The 40th Anniversary of the New Orleans Jazz and Heritage Festival. With the exception of a few years off here and there to have a baby or move a household, I have always tried to go every year. We have taken babies and toddlers to jazz fest over the years, but I don't recommend it and I don't think I need to explain why. My favorite fest partner often doesn't come because of the small legal troubles associated with leaving minors unattended while partying out of state, but some kindly uncles held down the fort this year so Chip and I could go together. Chip arrived a day later than me, dancing his way into the Blues Tent at 11:55a.m. Thursday to Jumpin' Johnny Sansone...like a bride coming down the aisle, he was almost as beautiful. Our friends from D.C. arrived later that day and we thought we'd be partying like rock stars for three days.

I am willing to not only admit but also put it in writing that I no longer have the stamina to do both daytime and nighttime activities at jazz fest. It's one or the other, my body has now informed me. And it's putting its foot down. I think this has always been the case, but my youth was able to overpower my body's desire for a shower and a pillow until this year. After ten hours in the sun, a bellyful of Louisiana cooking and twelve Miller lites, it is time to call it. The patient has expired. Time of death: 8pm.

We see the same strangers every year and it's comforting to know most of us are all still kickin' it old school during daylight.

The guy that looks just like my dad. Check. Although he looks a little frail this year. Disappointing.
The guy with the hairy back and muscle shirt. Check. With his little kids in tow. Interesting. I see no wife. Also interesting.
The man and woman second liners with their umbrellas in Economy Hall. Check. Older but still looking good.
The lady who danced with baby Olivia. Check. Alone every year. A little awkward. Poor thing.
Peanut Ear. Check. Shirt off already. No girlfriend this year, and no peanut for that matter. Just an earring.
Harry Shearer. No check. Did not see him this year and that is concerning to my mojo. 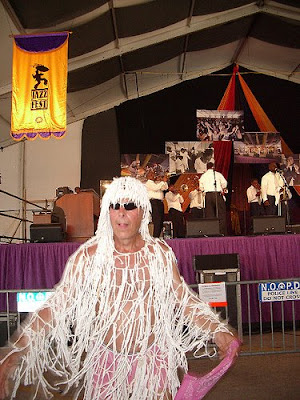 Everyone at jazz fest lost an old friend last year to cancer. A vigorously focused and driven (seriously, like outside forces were controlling his body), flamboyant dancer named Wing, who spent many years at jazz fest running up and down the aisles of the Gospel Tent doing interpretive dance. His friends reportedly brought Wing in their pockets this year and spread his ashes whenever they felt a Wing moment. You can read more about him at the Times Picayune website. I wish I could write like Chris Rose. It's a near perfect story.
http://www.nola.com/rose/index.ssf/2009/04/post_11.html 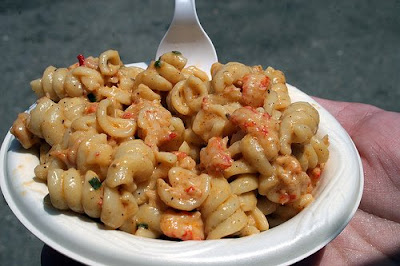 Our D.C. friends are thin and attractive so naturally we hid a lot of our eating from them while they thought we were listening to music. They were understandably shocked and horrified by my ability to eat my body weight in butter each day. Crawfish monica, catfish meuniere, fried okra and gator, cochon du lait po-boy, chicken tasso, etouffe, creole stuffed bread.....the list goes on and Chip and I conquered it all. The beer merely acts as a buzzy palate cleanser between courses. By Monday, we were drying out at my dad's house in Slidell, the Betty Ford Clinic of Jazz Fest (That's not my joke, but I stole it anyway) and by Wednesday, everybody was back at home and work with some very wonderful memories and still a little bit of a hangover.
Posted by Julie DeBrandt Hunter at 12:36 PM