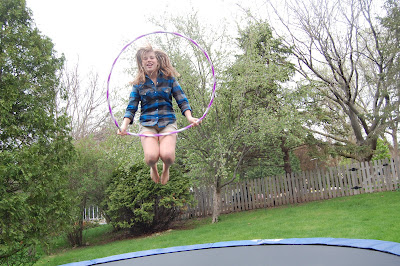 Our neighbors have a yard worthy of Architecture Digest and every summer we stand embarrassed (usually with cans of beer in our hands) to survey our yard's ever increasing trailer park qualities....cast off socks, flip flops, hula hoops, toy guns, balls amidst what can best be described as gonzo landscaping. The neighbors are wonderful people who revel in the diversity of generations represented in our neighborhood and our Beverly Hillbillies style of country living over here doesn't seem to faze them a bit. They even like to sit out on their patio and watch as Allison's head bobs up and down through the tree branches.

As our kids have reached their teens, there are less and less children interested in our yard and that makes me a little wistful. But the trampoline has created some new interest and there is nothing finer on a summer day than looking out the back window and seeing a load of kids fighting and cheating over who's turn it is on the trampoline. I leave them to their fussing for the most part. Negotiations are part of life and it's for them to figure out within my whimsical parameters. My rule is I reserve the right to kick them all out if they annoy me. It will never really happen but they don't know that and never will because ten year old boys don't read blogs. Usually one shout and they settle down. I can be a little scary. It's how I grew up. There was minimal interference from adults in my childhood neighborhood except to tell us to:
shut up
get off someone's property
go home
get out of harm's way idiot 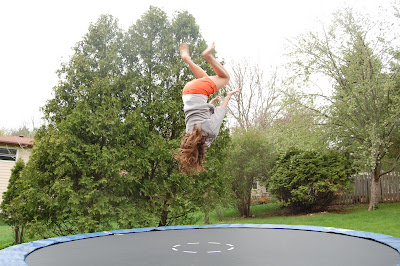 Beyond that, it was kid law. Survival of the fittest. Unfair most of the time. Brutal. Demeaning. Thrilling. Fun as hell. So, I'll leave them to it again this summer except for the occasional shout to be careful you idiots.
Posted by Julie DeBrandt Hunter at 2:18 PM