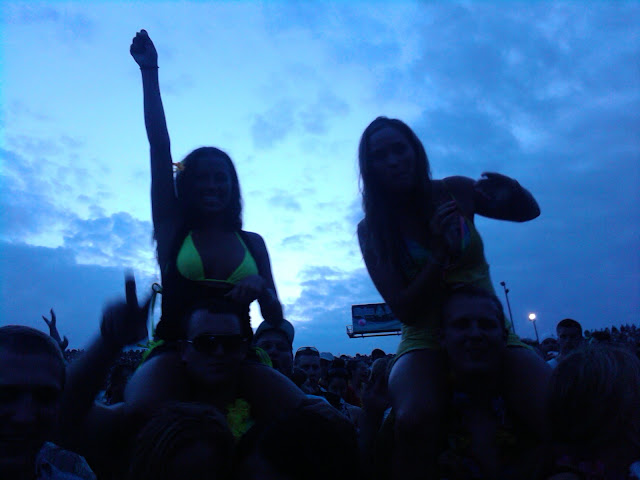 This past weekend was a surefire blogpost fiesta or so I thought, with a Jimmy Buffett concert AND a Justin Bieber concert on deck and it all being very exciting and fun but turning out in the end to not be very bloggable.  After all, what can be said about a Jimmy Buffett concert except that once you've been to one you know the scene.  And don't get me wrong, it's fun everytime...the parrots, the margaritas, the Coronas with lime, the guacamole in the tailgate, the drunks....but what to write?  The same holds true for taking a load of kids to see whatever pop culture icon du jour currently occupying their fantasies, whether Twilight or Bieber related.  But it's an uninteresting post no matter how many times I walk around it.  "Hey, my kid loves Justin Bieber and I drove her to Milwaukee so she could scream at his face for three hours with her friends. "  I'm just not feeling it. 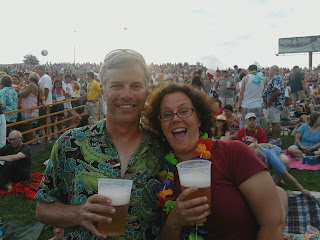 Designated driver....awesome.  No really, that was my last one before the show even started. At 13 bucks a beer, it wasn't hard to stop. 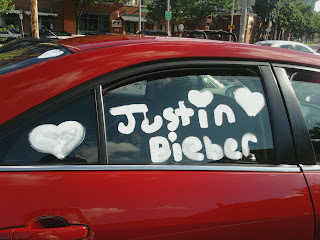 But the mundane is where the action is in my blog.  My trip to the laundromat, babies.  A universal experience to which most can relate, or should anyway.  Prince Charles and Candy Spelling, maybe not, but regular folks, yes.  Like the post office, it's really a place everyone should go periodically to appreciate just how much time and energy chores take without those luxuries many of us take for granted.  I blogged often about this in England where there were no dryers, a situation that subsequently drove me mad and rendered me somewhat obsessed with laundry.  And so I return to my roots. 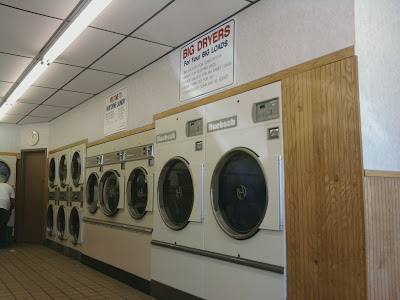 The sad truth is that once a year the cats or the dog throw up on something that's too big to put in our own washer spurring my annual and very personal laundry Hajj with affected comforter plus a few more, since I'm going anyway, that are in need of freshening. 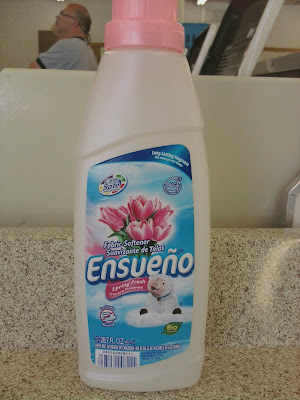 I was there to wash three comforters but most of the Sunday patrons were there for their weekly or in some cases monthly family laundry days.  A mother and her adult daughter were running an operation with quiet efficiency involving three triple load washers and multiple dryers while also directing those waiting as to which washers would be available next.  A pair of sisters arrived just minutes after me with their month's laundry only to watch me use the last triple load washer for my one item and well, I didn't blame them for their polite stink eye.  A mom and her teenage son of 14 or 15 folded an unimaginable amount of clothing before pushing the cart out to their car to unload pile after pile of clean clothes into their trunk.  On the surface it didn't appear that the kids had a choice about being there nor did they seem too perturbed about it either, checking their phones periodically and looking resigned without looking pissed off.  I'm going to guess that for many harder working families than us, helping one's parents is part of the drill.  It never occurred to me to ask a kid of mine to take two hours out of her day to help me with the laundry.  And why not?  I tend to shelter them too much from that sort of work, but really to whose benefit?   Then again at age 4 when asked to clean her room, Allison crawled military style on her elbows while dragging her inert lower body crying "I CAN'T! MY LEGS ARE BROKE."  So maybe I just gave up a long time ago.

The sweet smell of hot, clean clothes that may be a little sickening to some is olfactory music to me.  Laundromats are inherently clean places despite the dryer sheets blowing across the floor like tumbleweeds or the 16 oz. orange and purple abandoned soft drinks on the perimeter's ledges atop the strewn Sunday circulars left behind by those who did their laundry much earlier than me.  Like Tiffany's was to Holly Golightly, laundromats are to me.  They are places to think and to sit quietly in the uncomfortable plastic chairs or even nap on a sunny day in one's car with the windows down and the radio on like the guy next to me in the parking lot.  It's too noisy to talk so mostly no one does. The dull roar of dryers and washers creates a sound barrier around each person moving silently among the others, going about the very personal business of clean clothes.  Everybody doing things just a little bit differently.  Dryer sheets or liquid fabric softeners, Tide or Gain, Scented or Non, Ensueno or Snuggle.  Folded. Crammed into black plastic trash bags. Separate colors in different washers or all together in one big washer. Delicate colored bras and silky underthings brazenly hung over the cross bar tops of the rolling baskets.  I just like to nestle into my own thoughts, people watching and daydreaming in the deafening din.  A few odd and creepy guys came in of course, as they usually do, but also a mom and her two little kids with an insane mountain of wet, mildewed laundry that had been blessedly soaking up rain water in their basement, saving them thousands of dollars of damage, while they were away on vacation.  A story behind every basket.  Did not ask the creepy guys their stories. 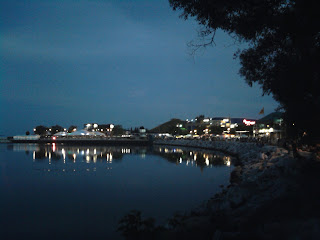 Goodnight Justin and old B.B. King, from Milwaukee's Summerfest
And at the end, the cat vomit was well clear in time for Paw Paw's visit and I myself now serendipitously have a clean and fresh bed from top to bottom.  I'm sleeping well this week.
Posted by Julie DeBrandt Hunter at 11:57 PM