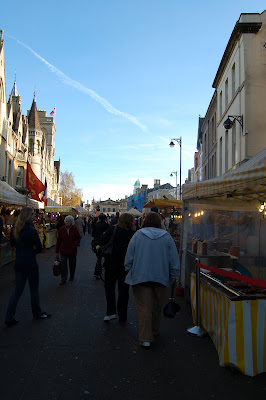 As I was riding my bike this morning, the phrase "Carpe Diem" crossed my mind as a mantra for living in English weather. If the sun is out, you would do well to pull your finger out and get outside. Because in the wink of an eye, a huge fluffy bank of grayish cloud can stealthily drift out of nowhere and steal the sunshine for the rest of the day. I am a little weather fixated because of a more overarching, bordering-on-obsessive theme--laundry. So today, the forecast was sunny spots early and increasing clouds and that is a recipe for getting up and out early. A market set up for the day billed itself as a Continental market. It looked more like a Disney version of French food. Lots of baked goods, giant artichokes, crazy sausages and candy--surface pretty, but overall, uninspiring. 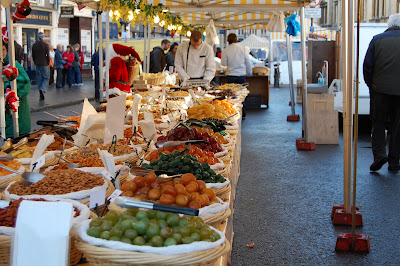 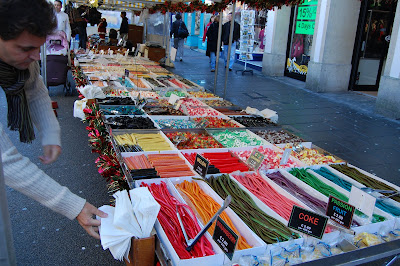 I hopped back on my bike for a ride out the Cowley Road. Now this is the real deal. A truly diverse road lined with businesses that represent many people and cultures. It's home to ethnic restaurants ranging from Jamaican to Asian to Polish, halal butchers, church and charity shops, brasseries, fair trade shops, artist galleries, local grocers, bookies, Western Union, newsies, churches, bike shops, theaters and the list goes on and on. The sun, as predicted, was gobbled by the daily swirling gray cloud, so into the shops I went, in search of inexpensive Christmas gifts and decorations. It will be a recycled Christmas for us in Oxford, with cobbled together secondhand items that are either flat, small or easy to pack gifts as well as consumables. There's plenty to choose from in the multitude of charity shops, so one of these days it will be time to find a little aluminum Christmas tree that fits in my bike basket. 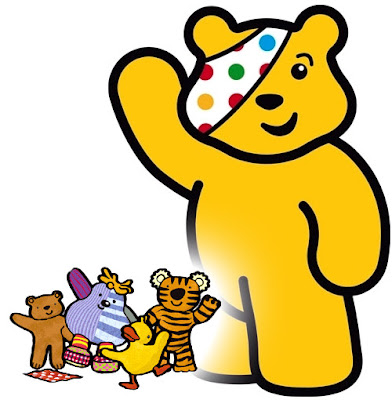 Speaking of charity shops, today is a national fundraising day for the Children in Need charity here in England. Troops of volunteers, including all students, are out on the streets or in their schools soliciting funds for this charity--big day on the BBC as well. It hearkens a little of an out of fashion approach to children with special needs and medical fragility... like the Jerry Lewis Telethon in its hey-ist of days, which strikes the cynical me as old fashioned and insulting to the children and families in the name of fundraising. But it's been a tough week for children in England, with several deeply disturbing deaths of children who died at the hands of their parents. The sentimental me can appreciate the simple desire to make children's lives better however old fashioned it may manifest in its effort. Tonight, a seven hour variety show on BBC 1 replete with soap stars, sports figures, popstars and newsreaders singing and dancing. I keep telling myself I must limit myself to one hour and no more. We'll see...I am always a sucker for a good telethon.
Posted by Julie DeBrandt Hunter at 9:08 AM