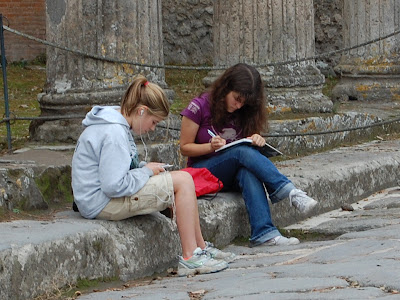 iPod'ing sketcher and diarist at work in the ruins

It must first be said that we have been crazy lucky with the rain this week. It has rained every day while we've been in Italy but never actually ruining a single activity. We've either just missed a downpour or have weathered it dryly by either being in the hotel, a restaurant, or a museum. Although all our news since Tuesday has been in Italian, it looks like there are areas of Italy flooding and Rome is probably one of them. But the Hunter vacation remains unaffected. The day we went to Pompeii was no exception as it rained all day, but in Rome, not Pompeii. 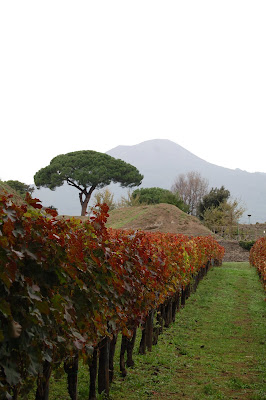 Vesuvius overlooks the town. The Mediterranean pine in the background is how the cloud above the volcano was described back in the day

Reflections on Pompeii:
1. Civilized
2. Cultured
3. Capitalist
4. Doomed
Vesuvius is right there as you can see. It was belching and causing earthquakes for hundreds of years before the big'un of 79. The earthquake the week before the big eruption likely drove most of the people out to safety except for the thousand plus who decided to stay. 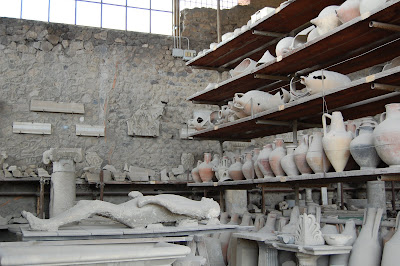 Poor dude who tried to leave but too late

Now the only inhabitants of Pompeii are a scrappy pack of dogs that roam the ruins freely and are fed bread by the tourists. 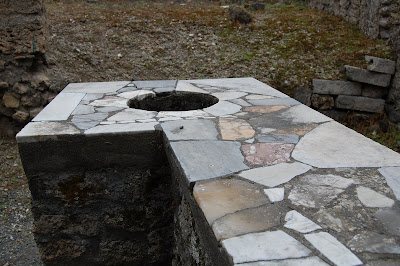 Seemingly modern tile work on a bread oven, looking into it for kitchen in Madison 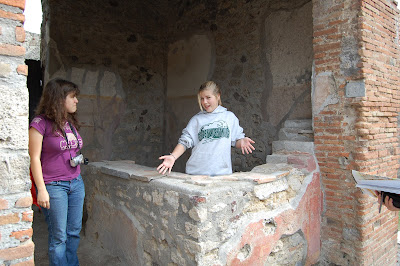 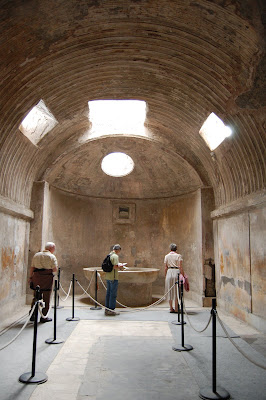 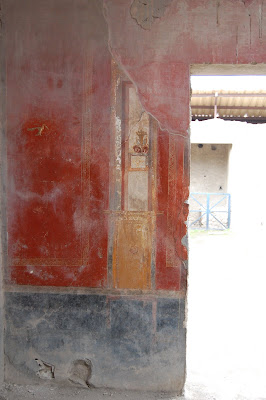 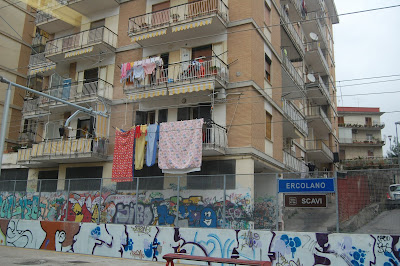 On the train back to Naples, we return to the present

It was a hard, long day followed by an outrageously happy meal at Dino and Tonys, a trattoria near our hotel. No menu nor prices ever appeared or were offered, but we were fed and given drink for almost three hours. As the third hour was drawing to a close, the girls had their heads down on the table begging to go back to the hotel room because they were so tired, but if you know Chip or me, you know that didn't stop us. We just pushed them to one side of the table and continued to enjoy our feast. We had a bottle of red, a very large antipasti, a pasta course, then a second pasta course because they brought the wrong kind to the table behind us, and just threw it on our table, two secondi (Tony said, "I bring fish and meat"-end of the discussion) and then two courses of dessert, a digestiv and a dessert wine. When the second course of dessert came (nutty hazlenut and peanut brittle and danish) after the tiramisu, berry compote, creme brulee and espresso granita, Olivia cried, "oh, no, no, no." To which, our waiter, Amadeo, pointed at the dish and replied, "Si, si, si, si." He was as bald and buff as Mr. Clean so we did not argue. We could have kept going with limoncello, grappa, espresso, cigars and more dessert like the table next to us, but begged for il conto so we could all go home and unbutton our pants.

One more post of pics from Italy tomorrow as we are back in Oxford tonight.
Posted by Julie DeBrandt Hunter at 7:04 PM