A few weeks ago, I was subjected to the English tradition of Christmas Pantomime. There is no translation into American culture except possibly regional dinner theater....without the dinner. And what is dinner in dinner theater but the only refuge and diversion from the horrible musical/comedy thing on the stage. From what I gather from the telly, "panto" as it's referred to, is generally set within a traditional nursery rhyme or story, such as Jack and the Beanstalk or Peter Pan, and made into an elaborate campy mess that includes transvestism, audience participation, drum rolls for comic effect and for adult audiences, repeated trips to the poorly cloaked penis joke well (pun intended).

Certainly don't watch more than feels right or you are likely to never want to visit England ever. I will let you in on a well kept giant secret....all washed up American actors come over here at some point to do Christmas pantos for the season, lauded by audiences and the BBC as if they are still major stars. They do nothing to dispel the myth of their relevance in interviews. Henry Winkler, Steve Guttenberg and hold onto your britches...Jimmy Osmond. All starring in their respective pantos this season. Can you believe it? They still get work, God bless 'em.

The thing is...England really does Christmas in a nice way. Every restaurant does Christmas dinners for various groupings, either work related or friends or family--ten or thirty, everybody goes out for a Christmas dinner at some point. Each dinner guest gets a Christmas cracker on his plate provided by the restaurant, and the prix fixe menu allows the party to go on with minimal interruption from the waitstaff. The tradition of hand delivered Christmas cards at these gatherings is one of the dearest things I've witnessed at a holiday. It is something quite old fashioned in the best way to see grown men and women running around a table before dinner to hand out Christmas cards like valentines, simply to wish their friends and family a very personal Merry Christmas. How wonderful it is to return home after a dinner out with your pockets or purse filled with handwritten cards. The sweatshop fashion in which cards are sent in the U.S. without even a handwritten signature, is impersonal and leaves me looking for any sign, even a ring from the bottom of a coffee cup, of some intimate touch by the senders.

So the English happily endure the panto season...where there's the requisite dude dressed up like a lady, the audience yelling "Oh no they didn't!" to which the cast yells "Oh yes they did!" (that goes back and forth about six times until you feel your fingers creeping up toward your ears to plug the bleeding from your brain) and then, there are the unceasing puns about spotted dick, melons, the financial crisis and how long Jack's beanstalk is, and finally, the all too frequent fondling of the guy in the cow costume. I can only equate it with the worst Sonny and Cher Show skit you never saw because it was too scandalous to get by the censors in 1973. 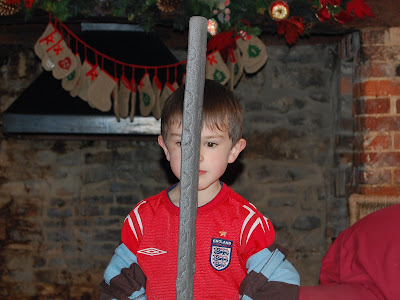 The gallant but violent prince 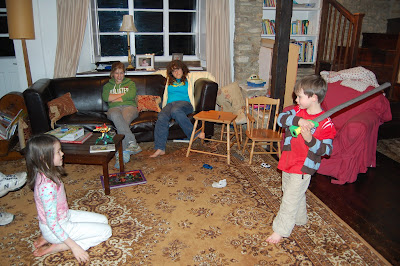 However, Christmas panto, as performed by Ella and Sammy, was an entirely different show and very enjoyable. It had a lot of violence with a foam sword, it had some singing which was operatic and tragic, and it had many laughs. We enjoyed a wonderful traditional English Christmas dinner replete with mulled wine, gammon, roast potatoes and veg, sprouts and a flaming Christmas pud. Well, it didn't really flame as Perry held back on the rum (who cares about the kids?, I yelled), but we smothered it with brandy butter and enjoyed it anyway. 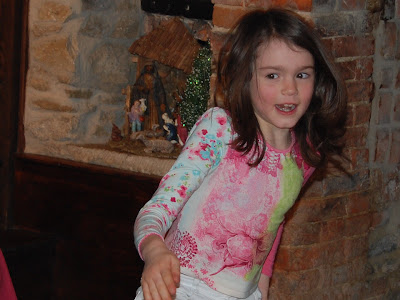 A beautiful song by the princess 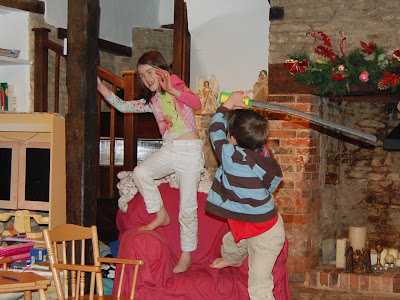 Serious violence with the sword

A wonderful way to usher in Christmas 2008 and a very public thank you to this wonderful family who I keep mostly anonymous to protect their privacy but to whom I want to shout a big "THANK YOU" for taking such good care of us while we've been here. It is good to have old friends who show the love. 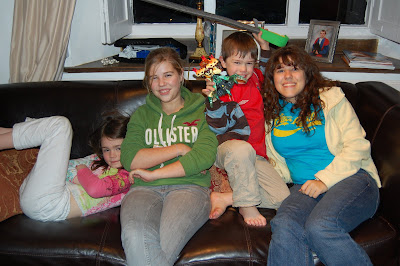 Cast members meet with the audience members after the show
Posted by Julie DeBrandt Hunter at 2:35 PM