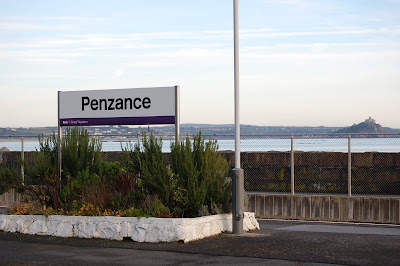 Time is flying and I am panicking about what I've yet to do. Kids have been sick, and now it feels like I haven't been anywhere! I fled Monday for Penzance, where I was sure to see the ocean and hopefully trek to Land's End. The real one. Actually, a five hour train ride is about all I can do alone without entertainment (in the form of Chip or television). Too far to only go for the day but not so far that the umbilical cord can't stretch-perfect. All this time together the past five months has ruined being alone for me. So much concentrated time together has made me dependent on the kids in a way, the kids might characterize, that indicates my need to get a life. I'm going to have some trouble adjusting when we get home and they don't invite me out with their friends. I'm guessing they'll cut me loose faster than Madonna cut Guy that check for 50 million. 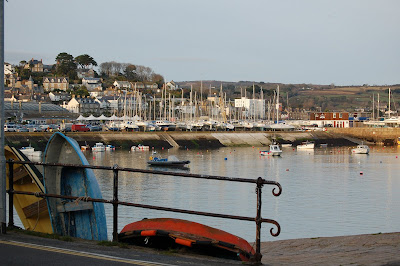 I didn't know, but do now, that the Gulf Stream clips Penzance in particular. It creates a tropical microclimate even in December. I stepped off the train to the port in Penzance. Palm trees, cool ocean breeze, blooming flowers...it was weird in the best way. 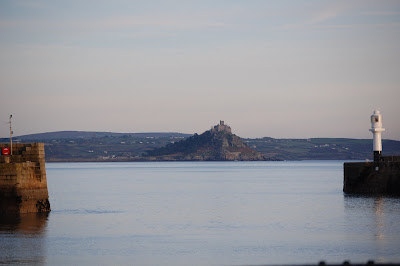 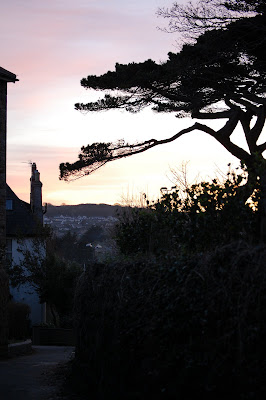 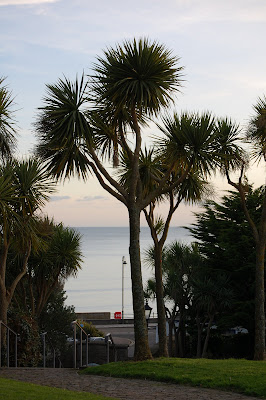 The Coast Guard kept a close eye on me during my stay. Below, the dawn view from my hotel room with the Coast Guard boat moored just offshore. The owners are wonderful people who let me leave today without paying because they don't accept credit cards and refused to take all my cash (embarrassingly short anyway). I was on the phone to Chip within minutes of their dropping me at the station (just the best people ever) to get him to put that check in the post this morning. 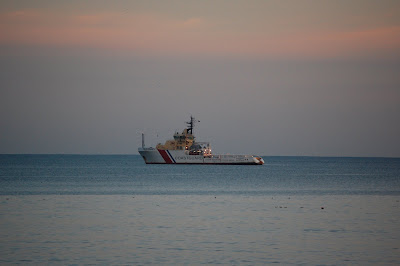 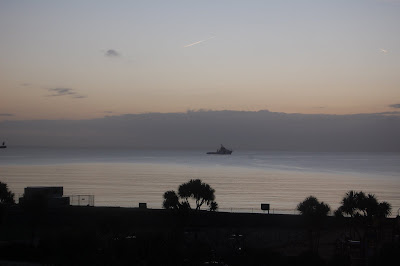 Yesterday, although it was cloudy, it was balmy for December, with temperatures in the fifties. I walked along the beach trail from Penzance to Marazion, the town next door. Suffice to say, Marazion's beaches are picturesque (a dog walker's paradise) and the town way deceptively farther than I thought. I was near dead when I arrived in Marazion, and desperate for a ride, any ride, back to Penzance. I saw an older woman near a bus sign--hallelujah. Twenty senior citizens and I bounced along the coast on the little green bus back to Penzance, shopping trolleys and one ancient husband flying into the aisle as the driver navigated the winding roads at break neck speed. What took well over an hour and a half to walk had a return trip on the bus of about six minutes. I think everyone but me was bound for the Tesco superstore. 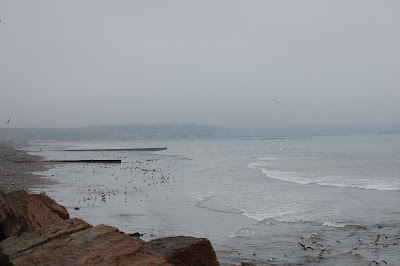 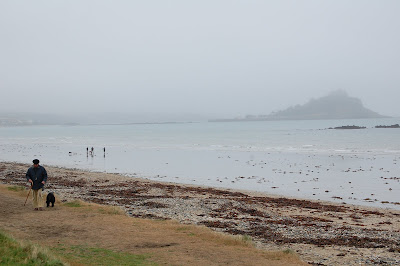 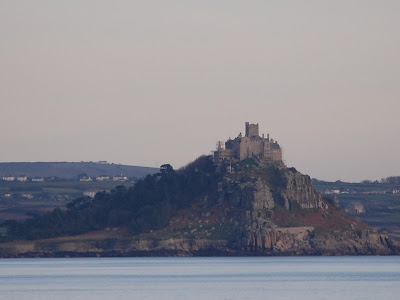 I missed the bus to Land's End because it left from the wrong stall at the depot and I guess all the local people knew, but I didn't. After ten minutes, I suspected the worst. The bus supervisor was there, so I said to him, "Was that the bus to Land's End?" He checked his clipboard and said "yes, m' love." I said, "Well, he was in stall B instead of stall C so I didn't know it was the right bus. Hey, you still have tourists out here in December, you know?" He was embarrassed but had no solution for me except to point at the cab stand. I took the cab ride with a disarming Irish cabbie who showed me the sights and took perhaps more of my money than he should have, the naughty old geezer. "I'd like to show you Sennen Bay,if you'll let me." It was beautiful, but I didn't notice any attempt to turn off the meter for the little diversion. In the end, the view of Sennen Bay was worth any extra money he charged. The bus ride back was free (I didn't ask), so in the end I was a spiritual winner even if fleeced out of some of my cash. The cabbie tried to talk me out of our family trip to Ireland...likely because he was run out of Ireland on a rail for his grifting ways.

Land's End is just that. Breezy and green, the views were amazing and although absolutely everything was closed, including the restaurant (the hotel lobby evoked The Shining for me so I didn't stick around in there) I still managed to kill two hours taking pictures, eating a bowl of soup in the cafe and watching the sun set behind the clouds. Oh, and the fleece jackets are SO much better out there! They grow right on the hillside and you can pick as many as you like, in an assortment of colors, blazon, cornflower and chameleon, sizes XS-XXL. 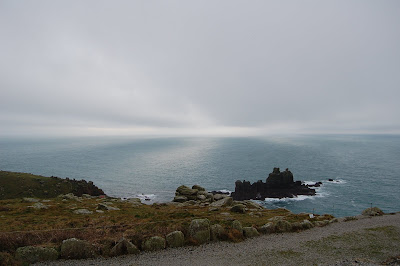 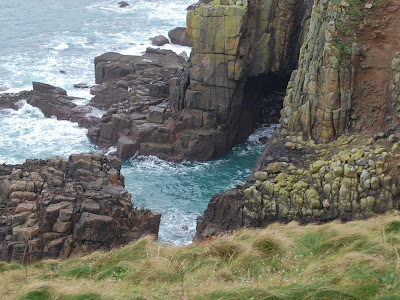 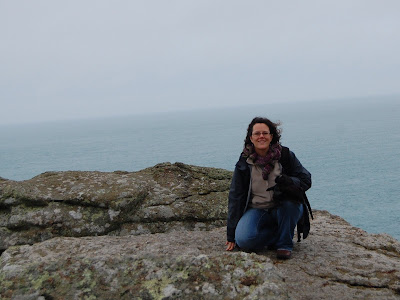 Self portrait!
Posted by Julie DeBrandt Hunter at 10:12 AM