Finally caught in the rain 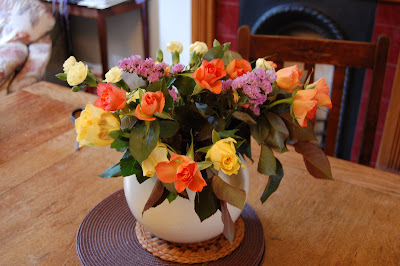 Woo hoo! FINALLY caught in the rain today. The funny thing is I thought that would have happened about a hundred times by now and I would be so bitter and hate the rain and the English weather, etc. But the weather has been really nice since we got here. England apparently had a miserable summer with lots of rain and flooding in July and when we arrived, the English were so bitter and angry about the weather, which we thought was funny. Since we've been here, however, it's really been ok although if you talk to people who lived here through July, they'll still tell you it's been non-stop raining since July. 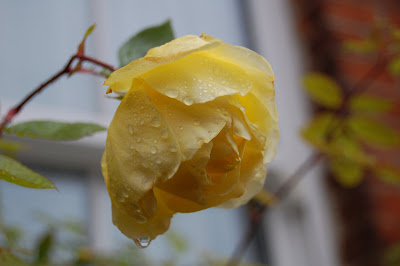 Today, however, a stereotypical blustery, rainy English day. I left this morning on my bike destined for Borders to find a book about Pompeii. It was cloudy and dreary, but still dry. Borders completely sucked, both in selection and at the help desk where they've strangely employed a very bored, sort of listless American young woman. She asked where I was from and then had no follow up question or comment once I told her. Weird, right? Don't ask, if you aren't going to follow up with some good American banter. I recognized her accent and didn't bug her about where she was from. Yuck. Get rid of her! A boring, unfriendly American is really irksome to another American when not in America. So, I left but then decided to try Blackwells, which is well known in Oxford and back in the eighties was the only bookstore in town. Still should be, after my Borders experience. It is a great bookstore. They have got it just right. I think I have been brainwashed by the Borders/Barnes and Noble franchises and their uniform approach to display and predictable groupings of books with enticing covers. Every store looks the same. Blackwells has four or five floors in a narrow but not claustrophobic building. There are cozy low ceilings, gentle lighting, carpeting, and lots of places to find a chair and peruse the book you might buy. I got lost for 90 minutes in the ancient history section (no, that has never happened before and likely not to happen again) but did find an excellent book in the end. I also read two other books about Pompeii so feeling very prepared to delight myself and irritate my children with fun facts on the train to Pompeii. They'll be screaming at me to shut up even before we leave Rome. It'll be awesome. Anyway, I paid and stepped out onto the sidewalk to real English RAIN! Still had to get to the market, so off I went on my bike in the downpour to Sainsburys. Did my shopping and as usual, bought a little too much...almost too much to safely cycle, but I like a challenge. When I came out of Sainsburys, it was really raining but all I had to do was get the groceries home, so I put what I could in the basket and heaved the rest over my shoulder and hopped on the bike for a very wet and windy ride home. It was exhilirating and the laptop is drying my trousers as I type. Almost time for tea.
Posted by Julie DeBrandt Hunter at 9:10 AM