The students are back 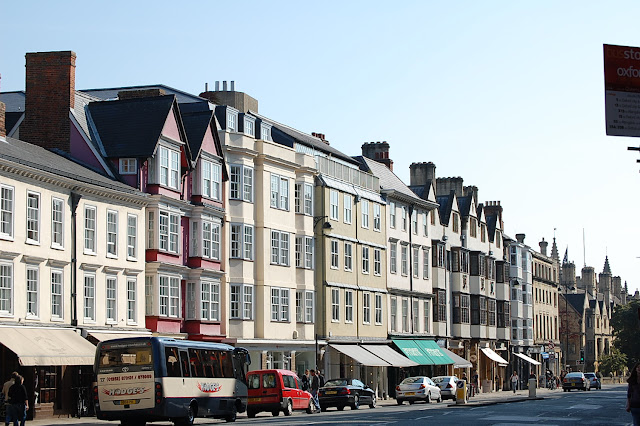 High Street, Oxford
"The High", site of many town and gown battles, leaving hundreds dead at times... tales that no longer feel disproportionately violent to the situation at hand


We've always lived near college campuses so you would think student behavior couldn't surprise me anymore. However. As the girls and I passed over the Folly Bridge yesterday a.m., I was surprised to see two gigantic picnic tables, a smaller table and all its chairs and multiple flower pots floating below us in the Thames. A late night student piss-up likely turned to vandalizing the patio of the Head of the River Pub. As I headed back south after dropping off the kids, I peered over the bridge again to see the entire mass of furniture had congealed at a corner where the patio and the bridge meet, waiting patiently for the pub to open. The pile, which looked a bit like the battlement in Les Mis, sighed, "no, no, this isn't the first time....that's why we developed this clever strategy to cuddle up to this bit of the patio so as not to drift away..."

The American students have also arrived, and I know that not only by their accents and their herd-like meandering. It's the jogging. They're doggedly determined to maintain the set pace (cardio! cardio!) through the crowded sidewalks, the ridiculous road construction with the sidewalk closures, the bus exhaust and the ankle breaking cobbles, while the florid parks and river trails sit just off to the left and right. Poor stupid dears. While the buses (bless them) continue to make way for me on my ever decreasingly wobbly cycle (today, I led the peloton up St. Aldates; three bikes and a double decker bus), the students aimlessly wander out into the bike lanes all over the city and eventually I suppose will end up ass over teakettle from a collision with my bike. It is conceivable that a bunch of students may rise up in anger, pick up me and BlueBess and toss us into the Thames. I guess I'll just drift over to the edge of the Head of the River until somebody fishes me out. "...Pint of bitter please? And would you be kind enough to get an oar or something to help me out? Cheers."

I can say with all of the students back and all the energy and life and excitement they bring to the city, I will rise up with the townies as necessary.
Posted by Julie DeBrandt Hunter at 5:15 AM