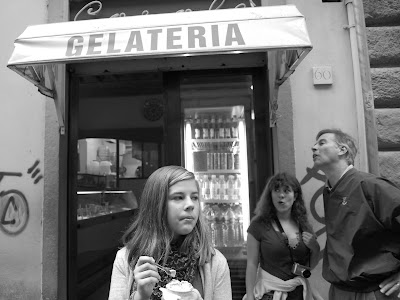 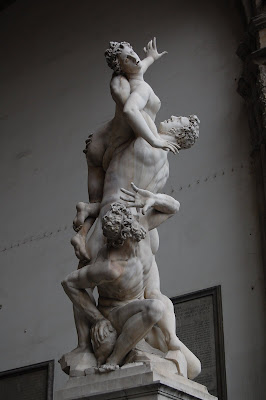 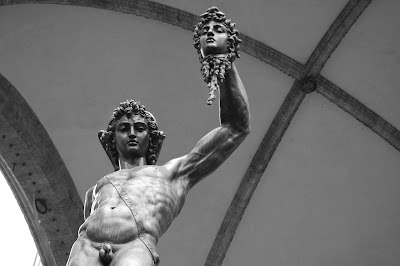 We spent our last day seeing David's "junk" and the Uffizi, although no pictures allowed at either place. The outdoor sculpture museum beside the Uffizi was impressive though so snapped a few last pics. It's outdoors but they do expect you to behave as if you were in a museum so there are guards out there to tell you not to climb on the sculptures, act a fool, set up your trinkets on a blanket to sell, etc. We did think it was funny that there is quite an extensive list of forbidden items, pictorially represented for the many languages spoken of course, and with a big red circle with a slash through it was a guitar. Yep, no hippies allowed up there strumming Bad Bad, Leroy Brown or I Gave my Love a Cherry. Well done, Florence. The guards are pretty grouchy at all the art museums, presumably because tourists are such idiots. They seem to especially delight in singling out and literally screaming at tourists who dare to sneak a photo of David. A guard in the Galleria actually yelled for everyone to be quiet because we were just getting too loud. This was in the entrance way where coats and umbrellas are kept. Tough crowd. 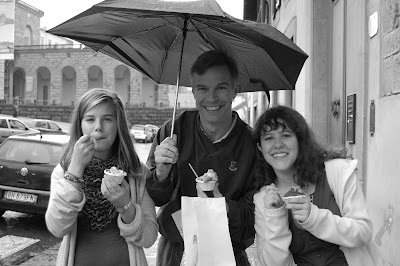 One more gelato before the train

We arrived in Rome after dark to Biblical Armageddon-y lightning, thunder and torrential rain that actually prevented us from going further than across the street to an Osteria, known to Lonely Planet as it turns out, and owned by a rugby player. It was a price fixe menu and giant rugby player waiters bring the food efficiently and with brute force, balancing multiple plates up their massive forearms. I didn't get a sense that they would take any crap from anybody and one should just sit and eat one's food, no matter what they brought. I can't imagine anyone ever complaining about their food at this particular restaurant--you would have to be very foolish. Olivia didn't finish her meatball, and the waiter looked at her, and gestured to the meatball, then turned to the kitchen and said, "Chef. Chef." So being that he was a playful chap and it was still raining a ridiculous amount, when he returned to the table, Allison and I asked in Italian for "la barca"--a boat. He really laughed, corrected us that we needed a "kayak" and said to Chip, pointing at me, "Spirito." Ahh, the power of the flirt. Two minutes later, Lambrusca and homemade biscotti showed up to our table, and he poured some for the girls and taught them how to dip the biscotti in the Lambrusca before eating. It was such a jolly meal. We waded home, stuffed our sneakers full of tissues and fell quickly asleep.

The byproduct of eating at 10pm is that every night in my dreams, I get to visit with everyone I've ever known or met in my life. There has been a rotating cast of thousands fueled by rigatoni, rolled beef, gelato and vino rosso. It's nice to see everyone but leaves me a little drained in the morning.
Posted by Julie DeBrandt Hunter at 2:48 AM