The votes are in 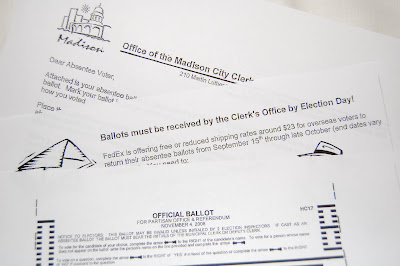 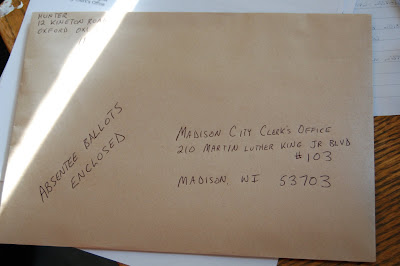 We voted today. You would have thought we never went to college. We read and re-read the directions about forty times before finally sealing the envelope. Chip has voted overseas before but he was a young lad and foolishly sent his ballot without fear or afterthought of fraud or miscount. We were acting like the fussy old people we are sure to become. "Did you sign that form?" "Do you think we should include that form?" "Do you think this pen is ok?" "How are you folding yours?" I have never voted absentee before. It was thrilling and felt a little naughty to vote before everybody else. I enjoy that feeling. Chip stood in the post office line behind a guy sending his ballot to Massachusetts and when he saw Chip was voting in Wisconsin, he told Chip he was jealous because his vote mattered. I guess swing states are exciting if you are from Massachusetts.

Now let me discuss my non-liberal regard for our resident Abingdon Road drunken bums/tramps. A local contingent of daytime drinkers who troll the main road between pubs and convenience stores that sell booze. We have pet names for many of them and that's probably wrong, but "The Wizard" and "Paw Paw" are just great names for old tramps with beards. Now I get all the reasons why they're out there, poverty, abuse, drugs, alcoholism, yeah yeah. Whatever. Well, here's what I think, Mr. Tramp, sir. I think if you are going to buy your 64 oz. of malt liquor at 8am while I am getting my newspaper, between my first and second cups of coffee, and you tip your imaginary hat to me, open the door for me and call me "love", then you should NOT turn on me at 3pm, slurrily yelling "Yaaazzaaaaz sholozza" while stepping toward me menacingly because you're really mad at your other drunken tramp friend who's bleeding on the phone in the phone booth. Don't you remember me from this morning? No. That's the point of the drinking all day...

Restored myself with a cup of tea and two darling young ladies. 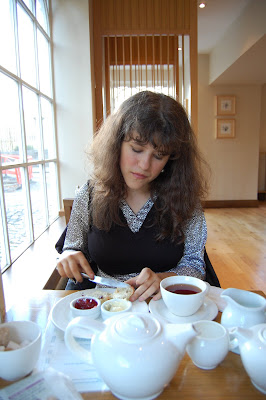 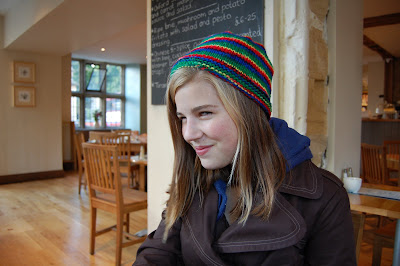 Hat made by me!
Posted by Julie DeBrandt Hunter at 4:12 PM