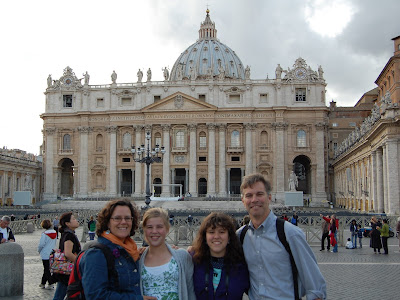 Storm gathering behind us

Well, they wouldn't let me see the Pope, can you imagine the nerve? I left him a note so will wait to hear back. The Vatican museum is laden with art and we spent several hours winding our way to the Sistine Chapel, which by the time you get there, is just the grandest of a very grand art collection owned by the Catholic church. I found it very interesting that a church that is so Catholic, which is the perfect word, could have such a challenging, varied and interesting art collection much of which has religious themes depicted as questioning to put it mildly. Much of the art work in the modern collection is profane or "profano" or something like that in Italian. Truly, the hierarchy of the church get the good end of the deal in my opinion as they get to enjoy the intellectual side of Catholicism which includes Salvador Dali and Francis Bacon (in addition to never turning down wine at weddings as my mom always pointed out when I was a kid) while parishioners have the doctrine spoon fed. No offense, I'm just sayin. It's good to be the Pope. 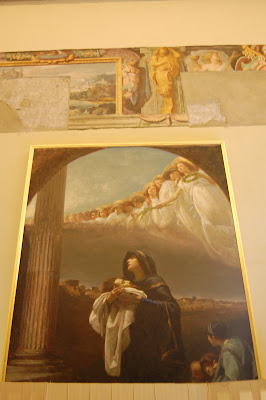 
There is a huge conference being held at the Vatican honoring the 50th anniversary of the election of Good Pope John. Papa Buono. Thousands of priests and nuns and pilgrims from his italian hometown were in attendance yesterday during several masses at St. Peter's. We saw the beginning of a mass at St. Peter's and returned to our hotel an hour later to find it being broadcast live on television. Pretty weird to know it was happening not a mile away. 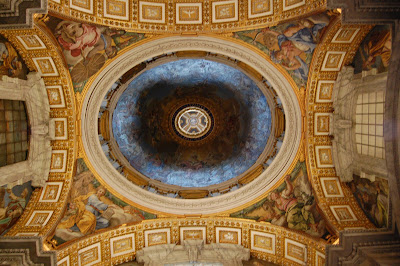 The sun sets pretty early now so we entered St. Peter's amidst a great thunderstorm gathering in daylight and emerged an hour later at dusk to a washed St. Peter's piazza. St. Peter's gets its point across, whatever it is. It can be thought to honor God and the welcoming arms of the church with its wide arms surrounding the center, or it can be a tribute to the power of Man who can erect such a masterpiece of architecture. I'm enthralled with all gee gaws, Catholic. Crucifixes, medals, prayer cards, rosaries especially. I want to be a Catholic. Chip says no. 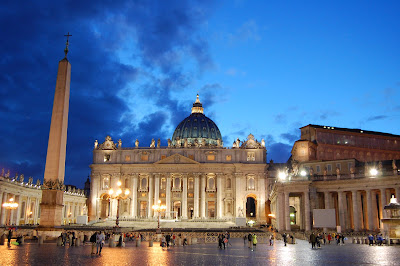 Storm has passed, dusk settles on the Vatican 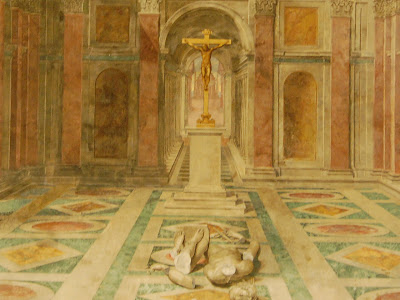 Another fresco, very old but very modern in its content

Within the Catholic tradition, I now confess my sin that while standing inside the Sistine Chapel with my family unwittingly shielding me, I did a bad thing. I tilted my camera up and snapped away. I wasn't trying to get The Creation of Man but I did a little. It will be a shock to them that they were accomplices as they had no knowledge until now. What can I say, when you tell me not to do something, I instantly want to do it. 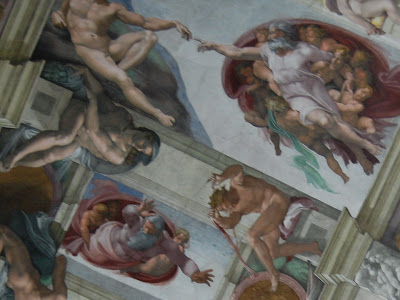 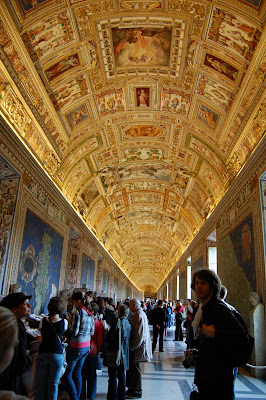 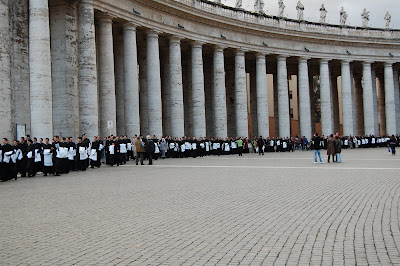 Hundreds of seminarians awaiting mass inside
Posted by Julie DeBrandt Hunter at 6:08 PM